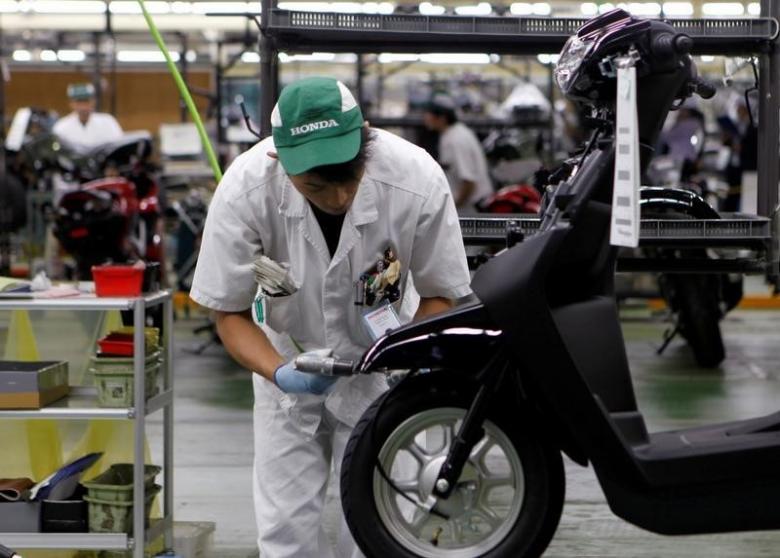 TOKYO - Japan's industrial output was expected to show little change in October, a Reuters poll found, suggesting uninspiring domestic and external demand hampered a steady recovery in production. Industrial production was seen likely to slip 0.1 percent in October from the previous month, the Reuters poll of 20 analysts showed, after a 0.6 percent rise in September and a 1.3 percent growth in August. "Compared with last year and around early this year, the trend of factory output has recovered," said Toru Suehiro, senior market economist at Mizuho Securities. "But it has not returned to a steady recovery path due to sluggish domestic and external demand." Analysts say production in sectors such as transport equipment and electronic parts and devices likely stayed solid, but weak exports probably undermined sectors like business- oriented machinery. The trade ministry will release factory output at 8:50 a.m. on Wednesday, Nov. 30 (2350 GMT, Nov. 29). The poll found the pace of decline in retail sales and household spending was likely to slow in October but both indicators were nonetheless expected to fall for an eight straight month. Retail sales were seen falling 1.2 percent in October from a year earlier and household spending likely slipped an annual 0.6 percent, according to the poll. "Private consumption stayed sluggish but it seems to have hit the bottom and it is in the phase of whether it will return to a moderate recovery," said Takeshi Minami, chief economist at Norinchukin Research Institute. The poll found the unemployment rate would be steady at 3.0 percent in October and the jobs-to-applicants ratio was likely to improve to 1.39, which would be the highest since August 1991 when the ratio was at 1.40. The internal affairs ministry will issue household spending and jobs-related data at 8:30am on Tuesday and the trade ministry will announce retail sales at 8:50am on the same day. Japan's economy, the world's third-largest, expanded for a third straight quarter in July-September, but weak domestic activity cast doubt on hopes for a sustainable economic recovery. The BOJ switched its policy target to controlling interest rates from the pace of money printing in September, but any effect of that change is not expected to show up in next week's data. -Reuters