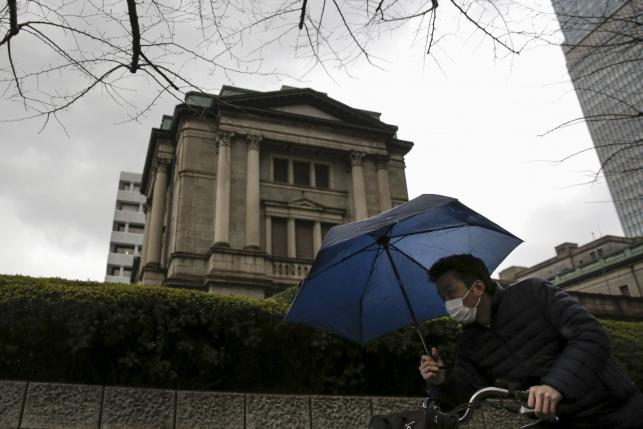 TOKYO - Japan's economy shrank more than expected in the final quarter of last year as consumer spending and exports slumped, adding to headaches for policymakers already wary of damage the financial market rout could inflict on a fragile recovery.

Gross domestic product contracted by an annualized 1.4 percent in October-December, bigger than a market forecast for a 1.2 percent decline and matching a fall marked in the second quarter of last year, Cabinet Office data showed on Monday. It followed a revised 1.3 percent increase in the previous quarter.

The data underscores the challenges premier Shinzo Abe faces in dragging the world's third-largest economy out of stagnation, as exports to emerging markets fail to gain enough momentum to make up for soft domestic demand.

Abe sought to reassure markets that Tokyo is ready to stem excessive market volatility that could undermine the wealth effect delivered by his stimulus policies.

"As we have agreed at G7 and G20, sudden currency moves are undesirable. I want the finance minister to closely monitor the situation and respond with appropriate measures as needed," he told parliament on Monday.

Market speculation of additional monetary easing simmers, although the Bank of Japan's policy ammunition appears to be dwindling, analysts say.

"Private consumption is especially weak. The economy is at a standstill," said Junko Nishioka, chief economist at Sumitomo Mitsui Banking.

"It's a matter of time before the BOJ and the government will take additional stimulus measures," she said, predicting the central bank will ease policy again as early as next month.

RUNNING OUT OF AMMUNITION?

With his stimulus policies that gave big manufacturers windfall profits, Abe had hoped to generate a positive cycle in which companies raise wages and help boost household spending.

Instead the data showed that private consumption, which makes up 60 percent of GDP, fell 0.8 percent, exceeding market forecasts of a 0.6 percent decline.

The economy grew an average 0.68 percent since Abe's administration took office in 2013, below a 1.8 percent increase during the opposition Democratic Party's three-year reign.

But analysts doubt whether the economy will gain momentum in coming months, with the recent market turbulence and slowing Chinese growth clouding the outlook for corporate profits.

Last month the BOJ cut a benchmark interest rate below zero, stunning investors with another bold move to stimulate growth.

But the shock move has failed to boost Tokyo stock prices or weaken the yen as Japanese markets remained at the mercy of a global equity sell-off. -Reuters