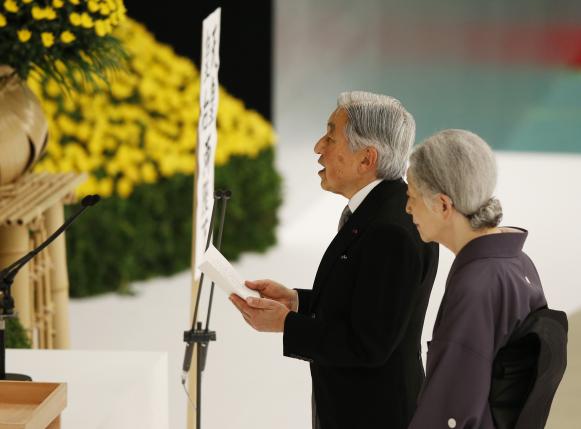 TOKYO - Japanese Emperor Akihito marked the 70th anniversary of the end of World War Two with an expression of "deep remorse" over the conflict on Saturday, a departure from his annual script which could be seen as a subtle rebuke of Prime Minister Shinzo Abe. Abe on Friday expressed "utmost grief", but said future generations should not have to keep apologising for the mistakes of the past. He offered no fresh apology of his own. "Reflecting on our past and bearing in mind the feelings of deep remorse over the last war, I earnestly hope that the ravages of war will never be repeated," Akihito, 81, said at a memorial service on the anniversary of the day his father, Hirohito, announced Japan's defeat. "Together with all of our people, I now pay my heartfelt tribute to all those who lost their lives in the war, both on the battlefields and elsewhere, and pray for world peace and for the continuing development of our country." The legacy of the war still haunts relations with China and South Korea, which suffered under Japan's sometimes brutal occupation and colonial rule before Tokyo's defeat in 1945. The soft-spoken Akihito has often urged Japan not to forget the suffering of the war and tried to promote reconciliation with Asian countries. His comments have attracted increased attention at a time when Abe appears to be pushing for a less apologetic tone towards Japan's past. Akihito had expressed remorse before, but not at the annual service. The constitution bans the emperor from any political role, so his remarks need to be carefully nuanced. On Saturday, Abe sent a ritual cash offering to Yasukuni Shrine for war dead but did not visit the shrine, seen in China and South Korea as a symbol of Tokyo's wartime militarism. While Abe, who has said he wants to repair ties with China and South Korea, did not visit Yasukuni in person, three of his cabinet ministers did along with the LDP's policy chief, Tomomi Inada, and scores of other conservative lawmakers. "HONOUR AND DIGNITY" Such visits outrage China and South Korea because the shrine honours 14 Japanese leaders convicted as war criminals by an Allied tribunal, along with war dead. Abe has not visited in person since December 2013. China's Foreign Ministry said that Saturday's visit "reflects Japan's seriously wrong attitude to historical issues", while protesters at a Seoul rally burnt pictures of Abe. The remarks on Friday by Abe, seen by critics as a revisionist who wants to play down the dark chapters of Japan's wartime past, received mixed reviews abroad. Tokyo's close ally the United States welcomed Abe's commitment to uphold apologies made in the past. The United States approves of Abe's plans to play a greater security role in Asia in the face of a rising China, but also wants a lessening of tensions over history. China said that Japan should apologise sincerely to countries that suffered from its military aggression and urged Japan to "take concrete actions to gain the trust of its Asian neighbours and the global community". South Korean President Park Geun-hye said Seoul was focused on Abe's decision to uphold previous cabinets' understanding of history, but added that the speech contained "regrettable elements". She said she hoped Japan "soon and properly" resolved issues regarding women's "honour and dignity". Abe on Friday said Japan should "never forget that there were women behind the battlefields whose honour and dignity were severely injured". But he made no direct reference to "comfort women", a euphemism for the girls and women - many of them Korean - forced into prostitution at Japanese military brothels. Tokyo and Seoul have long been at odds over the issue of comfort women, with South Korea saying Japan has not done enough to atone for their suffering despite a 1993 apology. North Korea condemned what it called an attempt by Japanese "rightist conservatives to conceal its crime-woven past". Abe's conservative supporters are keen for Japan to put an end to what they see as a humiliating cycle of apologies. "We need to terminate (the cycle of apology) for our grandchildren and the grandchildren's grandchildren," said a 64-year-old man visiting Yasukuni. -Reuters