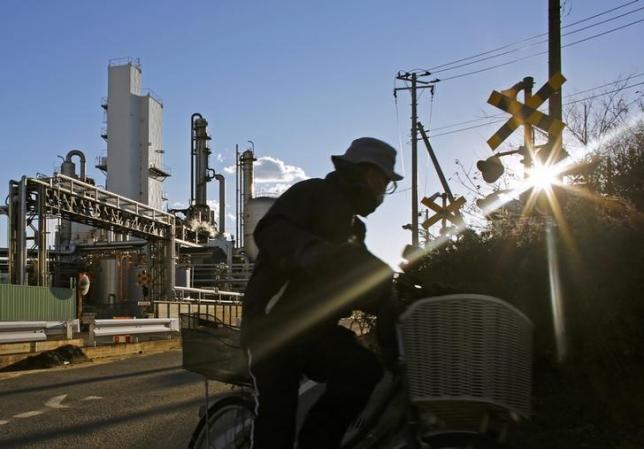 TOKYO – Japan's industrial output fell in February at the fastest pace in eight months due to declines in production of machinery, cars and electronics in a worrying sign that domestic demand could be faltering. Economists were already braced for a fall as many companies were expected to trim output due to the timing of Lunar New Year holidays, but the 3.4 percent month-on-month decline in February was much worse than expected at almost double the median estimate for a 1.8 percent fall. Manufacturers' forecasts for the coming months still point to a gradual recovery in output, but the outlook is less certain and could complicate the Bank of Japan's task as the economy slowly rebounds from last year's recession. "These results are a little worrying, because the decline in auto output could be due to weak domestic demand," said Hidenobu Tokuda, senior economist at Mizuho Research Institute. "Output is still on course to recover, but another disappointing number makes this scenario less likely." February's output slump was the biggest since June last year, when production also fell by 3.4 percent. Manufacturers surveyed by the trade ministry expect output to fall 2.0 percent in March and rise 3.6 percent in April. In January output rose 4.0 percent, the biggest increase in nearly four years partly as demand surged before the Lunar New Year. Many economists had said that rise was unsustainable, but the pace of decline last month suggests that the Lunar New Year is not the only reason why companies curbed output. If output continues to weaken, it would suggest that consumers are buying less goods and that companies will need to hire less workers, in turn hampering Tokyo's plan to revitalize the world's third-biggest economy and shake off years of deflation. The output data come two days before the BOJ's closely watched tankan survey, which is expected to show business sentiment improved in the first quarter as a weak yen boosts corporate earnings. Data last week showed Japan on the brink of deflation in February and consumer spending remained lacklustre, casting doubt on how long it will take the BOJ to meet its inflation target. The BOJ launched quantitative easing two years ago to boost inflation to around 2 percent, and while it has managed to lift inflation expectations some economists say domestic demand is still not strong enough to meet the central bank's price goal by its self-imposed deadline of sometime around next fiscal year. –Reuters