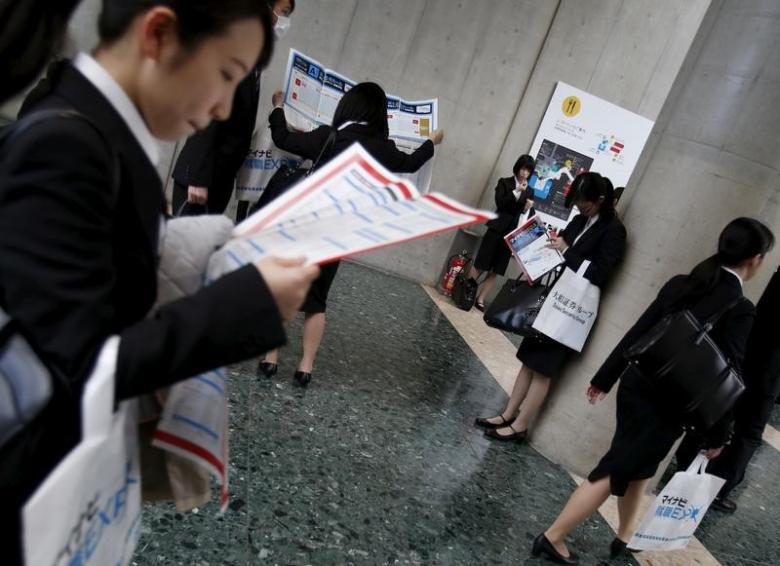 TOKYO - Japan's unemployment rate held steady in October as the availability of jobs improved and household spending fell at a slower pace, a tentative sign that a robust labour market is lending support to domestic demand. "The labour market has been improving for a while now, and this is starting to lift consumer sentiment," said Hiroshi Miyazaki, senior economist at Mitsubishi UFJ Morgan Stanley Securities. "I expect consumer spending to pick up pace in the future. People are also buying more household goods because the Bank of Japan's monetary easing has sparked an increase in real estate investment." Japan's unemployment rate has been falling partly due to its shrinking labour force and a shortage of workers in construction, healthcare and hospitality. The seasonally adjusted unemployment rate in October was 3.0 percent, unchanged from the previous month and in line with economists' median estimate. The jobs-to-applicants ratio rose to 1.40 from 1.38 in the previous month to reach the highest level since August 1991, separate data showed on Tuesday. The median estimate was for the ratio to rise to 1.39. But household spending has been falling since March as lacklustre gains in real wages and worries about how the Bank of Japan's negative interest rate policy would affect the pension system turned some consumers even more cautious, economists say. Data on Tuesday showed consumers did increase spending on domestic travel and furniture in October, offering tentative signs that spending overall is bottoming out. Household spending fell 0.4 percent in October from a year earlier, less than the median estimate for a 0.6 percent annual decline, as shoppers spent less on food and transport. Separate data showed retail sales fell 0.1 percent in October from a year ago, less than the median estimate for a 1.2 percent annual decline and less than a 1.7 percent annual decline in the previous month. Rising spending on clothes, food and transportation lead to the slower decline in overall retail sales, the data showed. Signs that the pace of decline in household spending is easing would be welcome for Japan's fragile economic outlook. Japan's economy expanded for a third straight quarter in July-September as exports recovered, but domestic activity remained weak. Other data has shown consistent declines in consumer prices, another warning sign that domestic demand lacks momentum. -Reuters