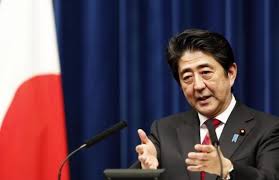 TOKYO - When Prime Minister Shinzo Abe addresses Japan's wartime past in a statement marking the 70th anniversary of the end of World War Two, the reaction of ally Washington will likely be as much, if not more, on his mind than that of Asian nations that suffered from Japanese military aggression. US officials have welcomed Abe's push to strengthen the alliance and give Japan a bigger global security role less constrained by its pacifist constitution. But they have also made clear they are loath to see Abe stir regional tensions with comments that critics could construe as whitewashing history. Abe, whose conservative agenda includes a less apologetic stance over Japan's wartime past, has previously expressed reservations about earlier apologies. They include a 1995 landmark statement by then-premier Tomiichi Murayama and 1993 remarks by government spokesman Yohei Kono over "comfort women" forced to work in wartime military brothels. More recently, Abe has said he intends to uphold such statements but has also signaled he wants to issue forward-looking comments in his own words to mark the anniversary of the conflict's end in August. One option, experts say, is for Abe to endorse past government apologies but stop short of repeating, as many in China and South Korea want, key phrases such as references to "colonial rule and aggression" and a "heartfelt apology". "If his strategy is to get past the issue and focus on the future, he can probably do that if he just embraces what previous administrations have said," said Scott Harold, deputy director of the Center for Asia-Pacific Policy at The Rand Corporation, a US-based think tank. "At that point, I don't think Chinese or Korean unhappiness would get much of an audience in the rest of Asia or the United States." Abe will be able to test the waters in high-profile speeches this month. First, he is expected to address a meeting in Indonesia on the 60th anniversary of the Bandung Conference, a gathering of Asian and African leaders opposed to colonialism. Next, he will speak to a joint session of the US Senate and House of Representatives on April 29, remarks likely to focus on the increasingly tight ties between the two allies as Abe loosens constitutional limits on Japan's military, enabling closer integration with US forces, as well as his agenda for generating economic growth. "Abe is hoping the positive messages he'll bring to D.C. on security cooperation and theeconomy will outweigh criticisms of him on the history issues," said a US-based Japanexpert. "All indications are that this will happen unless there are negative reports in the press about backtracking on history." CAREFULLY CALIBRATING Already, there are signs Abe is calibrating his comments ahead of the US visit. In an interview with the Washington Post last week, Abe said "comfort women" had been "victimized by human trafficking", a contrast with the stance of Japanese ultra-conservatives who have argued many were prostitutes. Abe did not, however, say who was responsible for the trafficking. Abe's conservative political allies want him to end what they see as an endless cycle of apologies that they believe distracts from Japan's record since 1945 as a peaceful nation. "I know there are people, and countries, who are making an issue of whether certain words are there or not," Yoshitaka Shindo, a former member of Abe's cabinet, told Reuters. "To repeat that over and over for political purposes – I don't think we have to consider that because Japan is a country that has not gone to war even once during the last 70 years. That is something we must say." Abe's critics, however, say the prime minister must lay to rest doubts about his view of wartime history that he himself has sparked. "He must erase those doubts and the simplest way to do so is to uphold the Murayama Statement unchanged," the 78-year-old Kono told Reuters in an interview last month. Japan's chilly ties with China and South Korea, long plagued by history as well as territorial rows, have shown signs of a thaw, most recently when foreign ministers from the three countries agreed a leaders' summit should be held soon. But Chinese Foreign Minister Wang Yi made clear that much of the outlook for improvement depended on Japan proving it was serious about acknowledging its wartime past. A spokesman for South Korea's Foreign Ministry said Abe's statement should include "comments that reflect a correct perception of history". Washington is keen to see better ties between Seoul and Tokyo, its two key Asian allies, but may not worry so much about complaints from Beijing, some US experts said. "There is already a reaction setting in the United States that the Chinese are just hopping on this to score political points," said another US-based expert. "My guess is that he will probably say enough so that America won't get that upset. Then I think he's ok even if China and South Korea give him a hard time, it will be contained." - Reuters