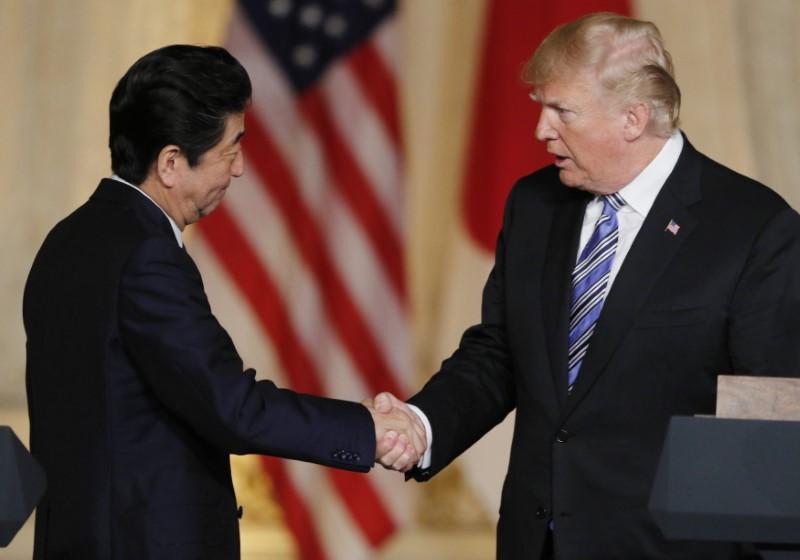 TOKYO (Reuters) - Japanese Prime Minister Shinzo Abe, seeking to draw on his close ties with President Donald Trump in talks on Thursday, will urge the US leader not to forget Tokyo’s security concerns in his drive for a historic deal with North Korean leader Kim Jung Un. Abe has spoken to Trump 30 times since he became president, including eight face-to-face meetings, and officials say Washington is well-aware of Tokyo’s stance towards Pyongyang. “Japan has repeatedly made clear that Japan is seeking complete, verifiable and irreversible dismantlement of all the weapons of mass destruction and ballistic missiles of all ranges, and Japan’s position has not yet changed,” a foreign ministry official told reporters on condition of anonymity. “We think the US of course understands Japan’s position.” Still, concerns have simmered in Tokyo that Trump, his eye on November congressional elections, could cut a deal that would allow him to boast of protecting US cities from nuclear attack but leave Japan vulnerable to shorter range missiles. Japan also fears Trump could eventually agree to reduce US military forces in South Korea, leaving Japan as a frontline state against a Korean peninsula under heavy Chinese influence. That would mean “Japan’s constitution, diplomatic policies and national security policies all will have to be totally reviewed for the completely new situation,” Katsuyuki Kawai, a special advisor on foreign affairs to Abe, told Reuters. “It would be a nightmare for Japan and also for the United States,” he said. Trump suggested on Friday that the most tangible outcome of the June 12 summit could be the “signing of a document” to end the technical state of hostilities - 65 years after the Korean conflict ended with an armistice, not a peace treaty. Trump also said he wanted to drop the term “maximum pressure” that his administration — and Japan — had used to describe an approach that combined tough economic sanctions with diplomacy and military threats from the U.S. president. The White House said on Monday that the US policy had not changed, while the Japanese foreign ministry official sidestepped the question of whether “maximum pressure” was still Japan’s stance. “Japan’s position is to expect the upcoming US-North Korea summit will be an opportunity to advance the issues of nuclear, missiles and - most importantly - abductees,” the official said. Japan has made clear that it will not provide economic assistance for North Korea until all three issues are resolved, including the emotive matter of Japanese citizens abducted by North Korean agents decades ago. Abe, who has made resolving the abductees issue a keystone of his political career, will also likely seek reassurance that Trump will keep that on his agenda with Kim Jong Un, after the president said he had not discussed human rights with North Korean envoy Kim Yong Chol at the White House last week. “I think what Mr. Abe expects is (that Trump) will at least raise this issue with Kim Jong Un when they meet,” said Tetsuo Kotani, a senior fellow at the Japan Institute of International Affairs. Japan could seek its own summit with the North Korean leader, depending on the outcome of his meeting with Trump. Abe’s close ties with Trump have so far done little to insulate Japan from Washington’s “America First” stance on trade. Trump is pressing Tokyo for a bilateral free trade agreement while Japan insists multilateral deals work best. Japanese officials declined to speculate on whether trade would join North Korea on the agenda at Thursday’s talks, but White House spokeswoman Sarah Sanders told reporters that “trade issues and other matters” were expected to come up.