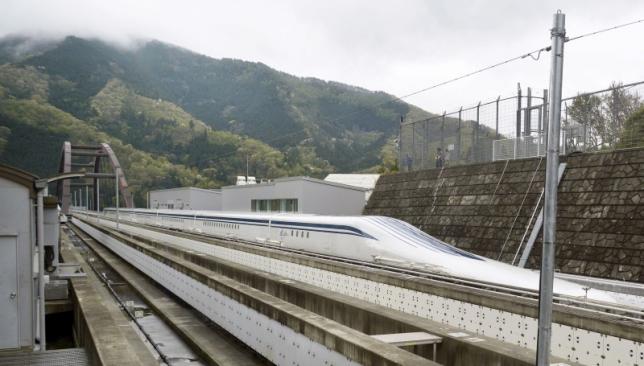 TOKYO - Few doubt Japanese Prime Minister Shinzo Abe's decision to invest public funds in a $90 billion dollar (68 billion pounds) high-tech "maglev" railway makes political sense. Whether it makes equally good economic sense is less clear. Proponents say lending government money to Central Japan Railway Company (JR Tokai) to speed up the launch of a service linking Tokyo and Osaka with a high-speed, magnetically levitated train will spark growth in an economy still fragile after three years of an "Abenomics" mix of hyper-easy monetary policy, spending and promised structural reforms. But critics counter the government is targeting the plan mainly because it has a big price tag, and doubt its economic impact and export potential. "Abe needs to spend a lot of money and it's easy to spend on big projects," said Fujitsu Research Institute economist Martin Schulz. "Abe needs things that are linked to technology, the future of infrastructure and getting Japan into the next century. On paper, maglev ticks most of the boxes," said Schulz, adding the benefits might not stack up in practice. Other private economists share those doubts. "It is highly questionable whether we need to fast-track this," said Hiroshi Shiraishi, senior economist at BNP Paribas Securities. Abe's administration decided to back the project only after the Bank of Japan in January adopted a negative interest rate policy and the government got a Group of 20 go-ahead for more fiscal spending, interviews with local and national government officials, a JR Tokai executive and an Abe adviser showed. Abe has pledged a stimulus package by the end of July, including using the government's Fiscal Investment and Loan Programme (FILP) to help JR Tokai bring forward operation of the maglev line from Nagoya to Osaka by up to eight years to 2037. The government is looking to lend 3 trillion yen ($28 billion) over three years at 0.3 percent interest, to be paid back over 20 or 30 years, an LDP lawmaker told Reuters. JR Tokai's original plan called for finishing a line from Tokyo to Nagoya, central Japan, by 2027 and - after an eight-year break to pay back debt - opening service to Osaka in 2045. The maglev, with speeds of up to 500 km (311 miles) per hour and running through tunnels deep under mountainous terrain, would cut the trip to Nagoya by one hour to 40 minutes, and to Osaka to just 67 minutes from 145 minutes. "GO IT ALONE" Unable to find a powerful political sponsor and with big public works projects out of fashion, JR Tokai had abandoned efforts to get government aid about a decade ago. In December 2014 began construction for the Tokyo-Nagoya line using private funding. That same year, business leaders, governors and LDP lawmakers in western Japan stepped up lobbying for a "national project" to finish the line to Osaka at the same time as that to Nagoya. "Originally, JR Tokai said it would fund this itself ... but people in Osaka wanted to speed up the second stage and wondered if FILP could be used," said a senior government source. FILP loans are financed by government bonds, but are not included in the regular budget so issuing them technically doesn't increase Japan's debt, already equal to more than twice the size of the economy. Such project-specific loans must be paid back by the firm that receives them. That lobbying effort seemed to be going nowhere until early this year, when the government began eyeing a stimulus package. "I proposed to Prime Minister Abe we make the best use of the negative rate environment to spur private and public investments," Abe adviser Satoshi Fujii, a Kyoto University professor, told Reuters. Pushing forward completion by eight years would have an economic spinoff of "several tens of trillions of yen", Fujii added. JR Tokai is considering the offer but some executives worry the government will try to butt into its plans for the maglev line. "If they put in money, politicians will interfere for sure," one JR Tokai executive told Reuters. "I wish the president would say 'No'." JR Tokai President Koei Tsuge welcomed the government's suggestion and said the company would consider it based on the premise of maintaining management freedom. "If they make a proposal acceptable to us as a private firm, this is very welcome," Tsuge said in a written statement to Reuters. A JR Tokai spokesman said fast-tracking the project by the full eight years would be tough given the need to assess environmental impacts and other challenges. "DREAM TECHNOLOGY" FOR EXPORT Some economists question how much speeding up the project would stimulate the economy anyway. "I have to give them credit for vision, but I'm not sure the numbers add up," said Morgan Stanley MUFG chief economist Robert Feldman. Abe, who is close to JR Tokai Chairman emeritus Yoshiyuki Kasai, has touted the maglev as a "dream technology" that could, for example, link New York and Washington in under an hour. Experts, however, cast doubt on the extent of overseas demand. "What is being sought is not super-high speed ... It's safety, convenience, network and environmental protection," said Reijiro Hashiyama, a University of Alabama professor emeritus. "In short, the export potential is zero." -Reuters