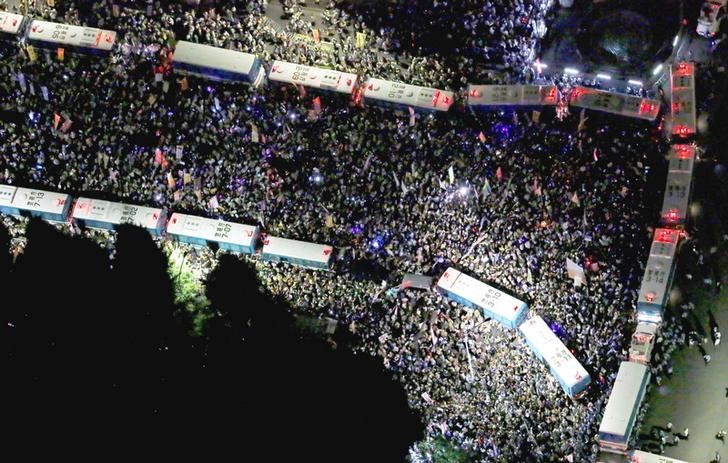 TOKYO - Crowds of protesters rallied on Wednesday as Japan's parliament moved close to passing bills for a defence policy change that could allow troops to fight abroad for the first time since World War Two, despite opposition by many ordinary voters. Demonstrators carrying banners that read "Scrap the unconstitutional war bills" lined the street near a hotel outside Tokyo where lawmakers were to hear public comments on the bills, which the government aims to get voted into law by parliament's upper house this week after committee approval. It was the latest in a string of protests that, while smaller, echoed those which forced Prime Minister Shinzo Abe's grandfather, Nobusuke Kishi, to resign as premier after ramming a U.S.-Japan security pact through parliament 55 years ago. The government says the changes to the law, welcomed by ally Washington, are vital to meet new challenges, such as that presented by rising neighbour China. Opponents say the revisions violate the pacifist constitution and could embroil Japan in U.S.-led conflicts around the globe. Abe's ruling bloc has an upper house majority, but major opposition parties have vowed to prevent a vote before parliament disperses on Sept. 27 by using delaying tactics such as no-confidence and censure motions. The bills have already been approved by the lower house. The legal revisions include an end to a decades-old ban on defending a friendly nation under attack, or collective self-defence, when Japan faces a "threat to its survival". The measures also expand the scope for logistics support for the militaries of the United States and other countries, and for participation in multinational peacekeeping operations. Some Southeast Asian countries, worried by China's actions to bolster its claims in the disputed South China Sea, have also welcomed Japan's security shift. China, where there is still deep anger over Japan's brutal occupation before and during World War Two, has said the legislation would "complicate" regional security. The revisions still leave Japan short of being a "normal nation", unconstrained in overseas military operations by legal limits and a deeply rooted public anti-war mindset. "If you look at before this set of legislation and related changes, it was a pretty ludicrous situation where Japanese Self-Defence Forces could barely do anything worthy of the name of defence forces except in a major attack on Japan," said Alan Dupont, a professor at the University of New South Wales. "I'd say they've moved from 25 percent to 50 percent. It's like a doubling of their flexibility and capacity to deploy forces overseas, but we're still 50 percent short of what the industry standard is." -Reuters