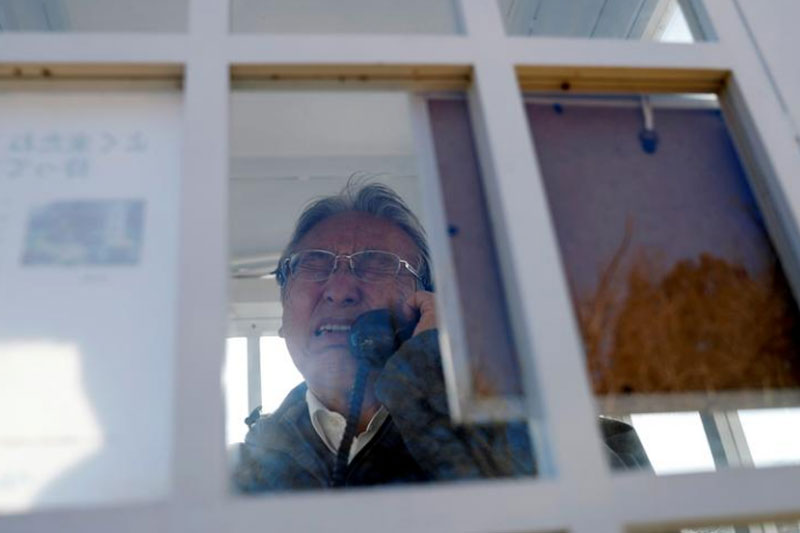 OTSUCHI, Japan (Reuters) - In a garden on a hill, under the wide boughs of a cherry tree, a white phone booth glistens in the early spring light.

He explains how he searched for her for days after the devastating earthquake and tsunami a decade ago, visiting evacuation centres and makeshift morgues, returning at night to the rubble of their home.

“It all happened in an instant, I can’t forget it even now,” he says, weeping. “I sent you a message telling you where I was, but you didn’t check it.”

“When I came back to the house and looked up at the sky, there were thousands of stars, it was like looking at a jewel box,” the 67-year old says. “I cried and cried and knew then that so many people must have died.”

Sasaki’s wife was one of nearly 20,000 people in northeastern Japan killed by the disaster that struck on March 11, 2011.

Many survivors say the unconnected phone line in the town of Otsuchi helps them keep in touch with their loved ones and gives them some solace as they grapple with their grief.

Earlier in the day, Sachiko Okawa calls Toichiro, her late husband to whom she was married for 44 years. She asks him what he has been doing with his days since he was swept away by the tsunami a decade ago.

“I’m lonely,” she says finally, her voice cracking, and asks Toichiro to watch over their family. “Bye for now, I’ll be back soon.”

Okawa says she sometimes feels like she can hear Toichiro on the other end of the line. “It makes me feel a little better.”

The 76-year-old, who learned about the hillside garden from friends, often brings her two grandsons here so they can also talk to their grandfather.

“Grandpa, it’s been 10 years already and I’m going to be in middle school soon,” says Daina, Okawa’s 12-year-old grandson, as they all squeeze into the phone box. “There’s this new virus that’s killing lots of people and that’s why we’re wearing masks. But we’re all doing well.”

PHONE OF THE WIND

The phone booth was built by Itaru Sasaki, who owns the garden in Otsuchi, a town some 500 km (310 miles) northeast of Tokyo, a few months before the disaster, after he lost his cousin to cancer.

“There are many people who were not able to say goodbye,” he says. “There are families who wish they could have said something at the end, had they known they wouldn’t get to speak again.”

The phone now attracts thousands of visitors from all over Japan. It is not only used by tsunami survivors, but also by people who have lost relatives to sickness and suicide. Dubbed “the phone of the wind”, it recently inspired a film.

A few months ago, Sasaki says he was approached by organisers who want to set up similar phones in Britain and Poland that would allow people to call relatives they had lost in the coronavirus pandemic.

“Just like a disaster, the pandemic came suddenly and when a death is sudden, the grief a family experiences is also much larger,” the 76-year-old says.

I’M SO GLAD WE MET

Like thousands of others in devastated coastal communities, Kazuyoshi Sasaki, the councilman, lost not only his wife but many other relatives and friends in the disaster.

He had known and loved Miwako for most of his life.

He first confessed his love to her when they were both in junior high school, an offer she promptly rejected. It took another 10 years for the two to begin dating. Eventually, they married and had four children.

Sasaki explains to his wife that he recently moved out of temporary housing and that their youngest son is now building a new home where he can live with their grandchildren.

Before hanging up, Sasaki tells Miwako that a recent health checkup showed he had lost weight.

“I’ll take care of myself,” he promises her as a strong wind blows outside. “I’m so glad we met, thank you, we’re all doing what we can, talk soon.”