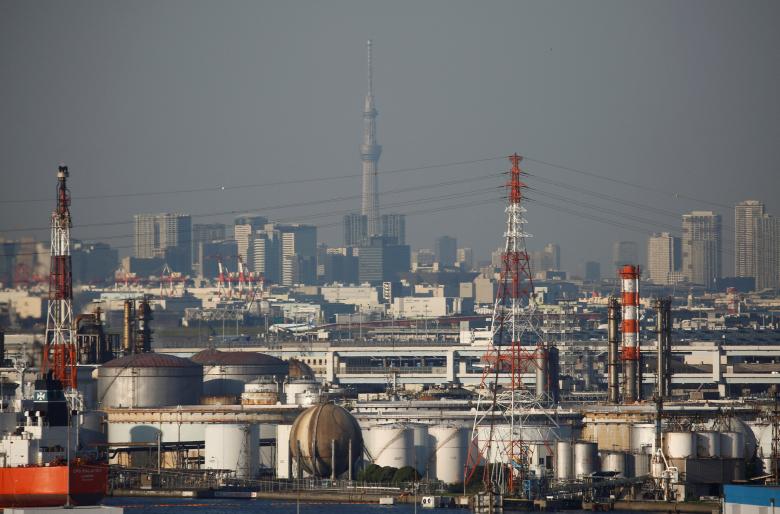 TOKYO - Japan's industrial output stalled in September in a worrying sign that the economy may be losing some momentum due to weak consumer spending and exports. Separate data showed retail sales fell more than expected in September, further evidence that private consumption remains a drag on growth. Industrial output was unchanged in September from the previous month. That compares with the median estimate in a Reuters poll of a 1.0 percent increase and followed a 1.3 percent increase in August, data by the Ministry of Economy, Trade and Industry showed on Monday. Lacklustre factory output, along with other data showing weak consumption and falling consumer prices could heighten expectations that the Bank of Japan will yet again push back the timing of its price target. Industrial output was flat in September as declines in semiconductor and personal computer production offset gains in autos and construction equipment. Manufacturers surveyed by the ministry expect output to rise 1.1 percent in October and gain 2.1 percent in November, but their forecasts are often overly optimistic. Retail sales fell 1.9 percent in September from a year earlier, slightly more than a median market forecast for a 1.8 percent decline, separate data from the trade ministry showed. The BOJ is likely to hold off on expanding stimulus at a meeting ending on Nov. 1. In a quarterly evaluation of its forecasts due at the rate-setting meeting, the central bank will cut next fiscal year's inflation forecast slightly, reflecting weak consumption and falling import costs from a strong yen, sources have told Reuters. The review may also extend the timeframe for hitting its ambitious inflation target beyond BOJ Governor Haruhiko Kuroda's five-year term that ends in April 2018. At present, the BOJ projects inflation to reach 2 percent during the fiscal year ending in March 2018. Kuroda has said that he saw no immediate need to act, although the bank stood ready to ease if external shocks threaten achievement of the inflation target. Analysts are also of the view the BOJ would be in no rush to ease because its new policy framework, which targets interest rates rather than base money, is one better suited for a long-term battle to reach its price goal. -Reuters