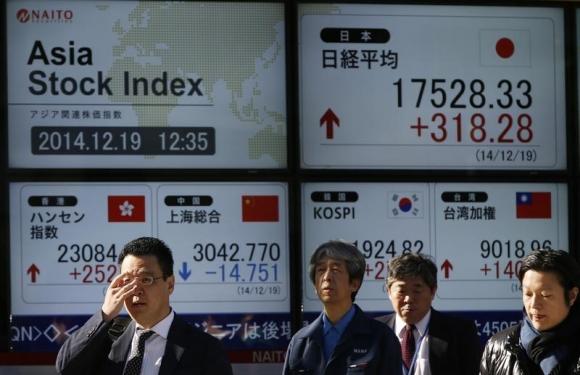 SYDNEY (Reuters) - The U.S. dollar nursed modest losses in Asia on Thursday while bonds held on to heftier gains as investors scaled back expectations on how fast, and how far, the Federal Reserve might raise interest rates in coming months and years. Japan's Nikkei rose 0.5 percent to heights last seen in 2000, helped by gains in financial and shipping companies. Data showed the country's exports grew at the fastest annual pace since late 2013 as a weaker yen made it more competitive. MSCI's broadest index of Asia-Pacific shares outside Japan was near flat with much of the region off for the Lunar New Year holiday. Markets in China, Indonesia, Malaysia, Philippines, Singapore, Taiwan and South Korea were all shut. But oil prices slid as U.S. crude stockpiles swelled by five times more than forecast last week. U.S crude was down $1.51 at $50.63 a barrel, from a top of $53.41 on Wednesday. Risk appetite had been whetted when minutes of the Federal Reserve's last meeting showed "many" members wanted to keep rates near zero for longer. "Our main takeaway from the minutes is that concern about downside risk to inflation has risen and, consequently, the bar for raising rates by June is higher than it was in December," said Barclays economist Michael Gapen. The shift in expectations was given added impetus by a surprisingly sharp fall in U.S. producer prices, which suggested the measure of core inflation followed by the Fed could slow to just 1.2 percent in January, further away from the central bank's target of 2 percent. Investors responded by pushing out the timing of a first Fed hike and by lowering the trajectory of rates for the next couple of years. Yields on two-year debt dived 7 basis points in reaction, the biggest daily drop since August 2011. Yields on 10-year notes were down at 2.07 percent, from a six-week peak of 2.16 percent. That helped Wall Street recoup early losses and the Dow ended down a slim 0.1 percent. The S&P 500 lost 0.03 percent while the Nasdaq added 0.14 percent. Falling yields were not so positive for the U.S. dollar which gave ground to its major competitors. The dollar eased to 118.65 yen, from 119.26 before the Fed minutes were released, while the euro rose to $1.1413 from $1.1340. The European Central Bank will publish its first minutes ever later on Thursday, providing insight into just how much support or resistance there was to last month's landmark decision to buy government bonds. Sentiment toward the single currency was helped by signs Greece would ask on Thursday for an extension to its "loan agreement" with the euro zone as it risks running out of cash, but it must overcome resistance from skeptical partners led by Germany. Financial markets had rallied after Athens said it would submit a request to extend the loan agreement for up to six months, hoping this signaled a last minute compromise to avert a bankruptcy and exit from the euro zone.