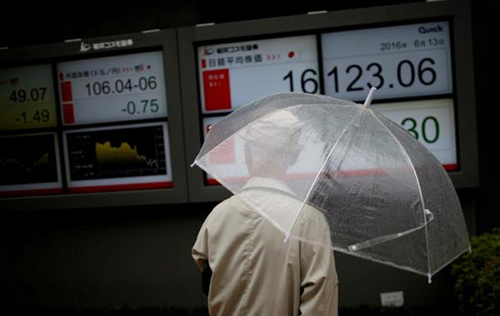 SYDNEY – Caution gripped Asian markets on Tuesday, sending the safe-haven yen scampering higher ahead of central bank meetings in the United States and Japan, while a fresh skid in oil dampened energy stocks. MSCI's broadest index of Asia-Pacific shares outside Japan .MIAPJ0000PUS was 0.2 percent firmer, still consolidating after recently topping out at nine-month highs. Japan's Nikkei .N225 shed 1.5 percent, with investors seemingly unimpressed by a Nikkei report the government planned a direct fiscal stimulus of around 6 trillion yen ($56 billion) over the next few years. Not helping was a broad rally in the yen, which saw the dollar and euro both lose 1 percent to 104.67 JPY= and 115.06 yen EURJPY= respectively. Dealers cited doubts the Bank of Japan would offer any meaningful new stimulus at its policy meeting on Friday. "We think they'll deliver a bit of everything, but not quite the bazooka some may be hoping for," said Frederic Neumann, co-head of economics at HSBC in a note. Expanded asset purchases or a further rate cut into negative territory were possible, but the extent of actual stimulus provided would depend on how they were implemented. In all, it's a recipe for volatility. "Our recent conversations with investors suggest that expectations are all over the place," he added. "The BoJ could simply do nothing. In the age of shock and awe, that would certainly deliver plenty of that." Markets see almost no chance of a hike by the Fed after its meeting on Wednesday, but are wary in case it acknowledges a recent improvement in US economic data in a way that adds to the risk of a move later in the year. Fed fund futures <0#FF:> imply a 56 percent chance of a rate hike in December, up from 48 percent on Friday. The uncertainty kept the dollar range-bound on the euro around $1.0990 EUR=. In contrast, sterling took a knock when the Financial Times reported Martin Weale, a member of the Bank of England's rate-setting committee, had dropped his opposition to an easing and now favoured immediate stimulus. The pound slipped to $1.3103 GBP=, from around $1.3140 late in New York, but has chart support in the $1.3060/76 zone. On Wall Street, the Dow Jones Industrial Average .DJI had ended Monday with a mild loss of 0.42 percent, while the S&P 500 .SPX dipped 0.3 percent and the Nasdaq .IXIC 0.05 percent. Apple (AAPL.O) shares fell 1.3 percent after BGC cut the stock to "sell" ahead of its earnings report on Tuesday. In commodities, oil languished near three-month lows as a global glut of crude and refined products weighed on markets. NYMEX crude CLc1 was quoted 5 cents firmer at $43.15, after losing 2 percent overnight, while Brent LCOc1 added 13 cents to $44.85 a barrel. –REUTERS