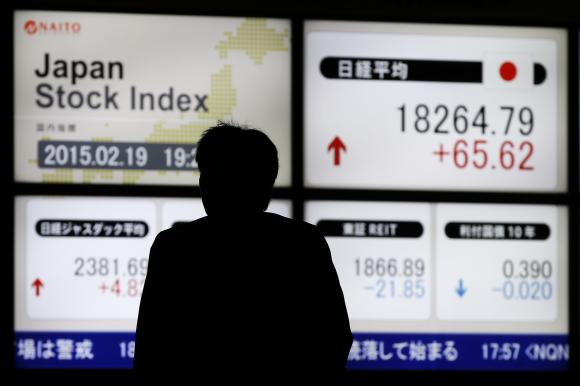 TOKYO (Reuters) - Japanese stocks rose to a fresh 15-year high on Friday with the dollar boosted by upbeat US data, but continuing uncertainty over the Greek debt negotiations weighed on the euro. Spreadbetters expected a cautious start for European shares on lingering uncertainty, forecasting Britain's FTSE to open flat, Germany's DAX as much as 0.2 percent lower and France's CAC down 0.3 percent. US weekly jobless numbers released overnight proved better than expected, diffusing some of the pressure on the dollar that followed dovish-sounding minutes from the last Federal Reserve policy meeting. The minutes had dented expectations for an early interest rate hike by the Fed, driving US debt yields and the dollar lower. Japan's Nikkei climbed to a fresh 15-year high and was last up 0.3 percent. "Now the market is relieved again on hopes for an earlier US rate hike," said Nobuhiko Kuramochi, a strategist at Mizuho Securities, noting that a stronger US economy is beneficial for Japan. A weaker yen also helped Tokyo shares. MSCI's broadest index of Asia-Pacific shares outside Japan was down 0.3 percent, with many of the regions' markets closed for the Lunar New Year holiday, including China, Malaysia, Singapore, Taiwan and South Korea. The Australian Securities Exchange, one of the few major bourses in the region to open, saw its benchmark shed 0.4 percent as corporate earnings disappointed. In addition to the US data, the greenback was also supported as the ebb and flow of confidence in the difficult talks between Greece and its lenders capped the euro. The common currency was encouraged earlier on Thursday after Greece was seen to have caved in after weeks of haggling and asked for a six-month extension for its loans. But the euro's rise fizzled after Germany snubbed the proposal, saying it was "not a substantial solution." Immediate focus is on the euro zone finance ministers' meeting later on Friday and whether differences can be ironed out then. "The market appears to be relieved for now after Greece asked for a loan extension. But Greece is not promising fiscal austerity and Germany has shown scepticism," said Masafumi Yamamoto, market strategist at Praevidentia Strategy in Tokyo. "The market is used to seeing this by now, but if a deal isn't reached today, the euro could face selling pressure and dollar/yen could also see the same as risk appetite will be hurt," he said. The dollar was steady at 118.920 yen , pulling away from an overnight low of 118.42. The euro was little changed at $1.1363 , after being nudged down from the previous day's peak of $1.1450. benchmark 10-year US Treasury note yield treaded water at 2.110 percent after rising about 4 basis points overnight. In commodities, US crude oil rebounded partially from two days of losses and gained 0.9 percent to $51.64 a barrel after a buildup in crude inventories reported by the US government was less than expected. [O/R] Crude may get further support if industry data later in the day shows another fall in the US oil rig count to multiple-year lows.