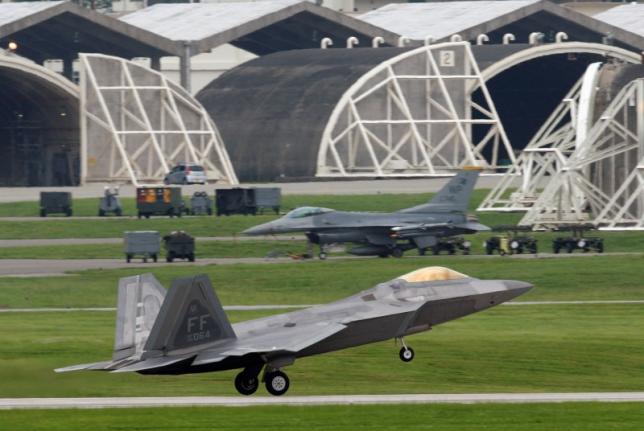 TOKYO - Japan will ask US President Barack Obama to take strict measures to prevent crime by people from US military bases after the arrest last week of a US worker in connection with the murder of a Japanese woman. Obama will visit Japan this week for a Group of Seven nations summit and he will also make a historic visit to the city of Hiroshima, which the US military attacked with an atomic bomb in 1945. US troops have been stationed in Japan since its World War Two defeat and about 50,000 remain in various bases. Occasional crime by US personnel or civilian base workers infuriates Japanese people and often fuels call for the bases to go. "I expect him to ask President Obama to deal with the matter strictly, taking into account the Japanese people's feelings," Japan's top government spokesman Yoshihide Suga told a regular news conference, referring to Prime Minister Shinzo Abe. Abe was expected to ask Obama to ensure that strict discipline is enforced at bases and other measures are taken to prevent crime, Suga said. A 32-year-old US civilian working at the Kadena air base on Japan's southern island of Okinawa was arrested last Thursday on suspicion of dumping the body of a 20-year-old woman. Police are investigating. Okinawa, the site of a bloody World War Two battles, hosts the bulk of US military forces in Japan and many residents resent what they see as an unfair burden. The island's governor, Takeshi Onaga, who was elected on a pledge to shift a big US Marines base off the island, was sceptical anything would be done on crime. "We've heard 'strict enforcement of discipline' and 'thorough steps to stop recurrence' hundreds of times over the past several decades, but that nothing has changed," Onaga told reporters after meeting Abe. Obama's visit to Hiroshima on Friday will be the first by a serving US president to the city devastated by a US atomic bomb on Aug. 6, 1945. Obama said in an interview with the NHK broadcaster on Sunday his visit would emphasise friendly ties between former enemies, and he reiterated he would not apologise for the atomic bomb attack. The city of Nagasaki was bombed three days after Hiroshima was bombed and Japan surrendered six days after that. A majority of Americans see the bombings as having been necessary to end the war and save US lives, although many historians question that view. Most Japanese believe they were unjustified. -Reuters