Japan, US in for tough bilateral trade talks over rice, autos 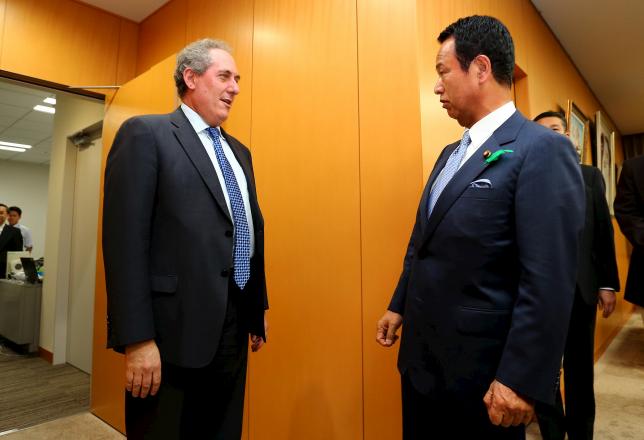 Japan, US in for tough bilateral trade talks over rice, autos

TOKYO – Japan and the United States kicked off the second of two days of tough trade talks on Monday that could pave the way for a broader trans-Pacific trade deal, although Tokyo shrugged off expectations of a bilateral deal in time for a summit next week. Speaking to reporters ahead of the meeting in Tokyo, Economy Minister Akira Amari said top-level negotiations with US Trade Representative Michael Froman, will be "very tough", adding that bilateral talks will hit the "most critical stage". Access to Japan's rice market and the US auto parts market remain obstacles to a bilateral deal between the two nations, which is vital to the success of a long-delayed Trans-Pacific Partnership (TPP) pact. The world's biggest and third-biggest economies account for some 80 percent of the economic output of the 12-member TPP. "I'd like to make utmost efforts to narrow the distance between Japan and the United States, while taking into account national interests," Amari was quoted as saying by public broadcaster NHK. Amari on Sunday said Japan would not accept a US demand to boost minimum access for its rice imports, while pressing Washington to further open the US car-parts market. He reiterated that he did not expect a deal before a summit between President Barack Obama and Prime Minister Shinzo Abe in Washington on April 28, but nonetheless hoped to make progress. "Because outstanding issues are difficult, we are not expecting all issues will be resolved this time although we want to make meaningful progress that will allow us to see light at the end of the tunnel," said a Japanese government source familiar with the negotiations. Japan is prepared to allow an import quota for US rice of 50,000 tonnes a year, just a quarter of the US demand, the Nikkei newspaper reported on Saturday. Japan has sought immediate abolition of a 2.5 percent tariff on US imports of auto parts, but Washington, under pressure from the politically powerful auto industry, wants to maintain auto-related tariffs as long as possible, the Nikkei reported. Prospects for the bilateral deal improved on Thursday, when senior US lawmakers agreed on the wording of a bill to give Congress a yes-or-no vote on TPP but not the power to alter a deal. However, passage of the "fast track" bill, which Japan says is essential, remains far from assured. Washington and Tokyo see strategic as well as economic value to a broad TPP deal as a counterweight to rising China, which has not joined the group. –Reuters