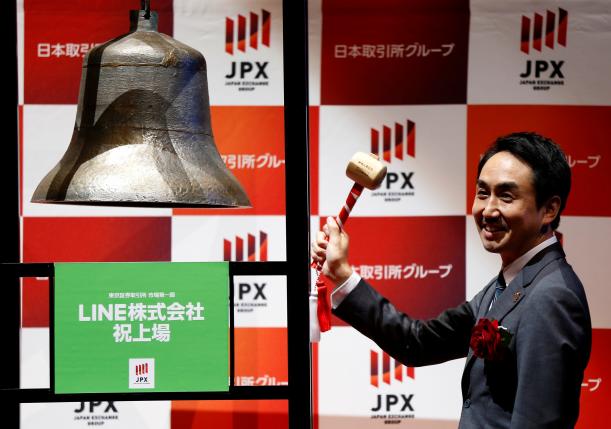 TOKYO Japan's Line Corp saw its shares rocket on their Tokyo debut on Friday, extending a strong start in New York the day before, and taking the value of the messaging app firm to $8.6 billion (£6.4 billion) in the year's biggest tech IPO. The operator of the world's seventh most-used messaging app listed first in New York in a move widely seen as a sign of determination to challenge global peers and eventually expand beyond strongholds of Japan and Southeast Asia. However, Line's 218 million global monthly active users pale in comparison to the 1 billion of market-leader WhatsApp and 900 million of Messenger, both owned by Facebook Inc (FB.O). Tencent Holdings Ltd's (0700.HK) WeChat, which dominates in China, has 697 million. "We're providing the same kind of services as Facebook and Google, the internet giants of the world," Chief Executive Takeshi Idezawa said at a Friday news conference. "Fighting in the same digital arena as them is extremely important for us." Line opened at 4,900 yen (£34.7) on the Tokyo Stock Exchange, 48.5 percent above the initial public offering (IPO) price of 3,300 yen, thanks to demand from investors hungry for a rare chance to invest in a tech startup. The stock closed at 4,345 yen. The Tokyo offering came after Line sold about 70 percent more shares in New York which closed 26.6 percent above the IPO. "That was a very smooth start," said Hiroyuki Fukunaga, chief executive of financial adviser Investrust. However, its inability to break the psychologically nicer-sounding 5,000 yen before falling back might blunt investor enthusiasm, he said. Line launched its eponymous app to overcome downed networks in the aftermath of an earthquake and tsunami in 2011, and quickly emerged as Japan's dominant mobile messaging platform. But the firm itself is controlled by South Korean online media provider Naver Corp (035420.KS) whose stake is now 80.8 percent. "Line's floating stock is limited, so despite the firm's large market capitalisation, the shares could be very volatile," said Investrust's Fukunaga. Line earns the bulk of revenue from games and the sale of emojis and electronic stickers. But like Facebook and Alphabet Inc's (GOOGL.O) Google, advertising is a key source of income, making up more than a third of Line's revenue. "We have a good balance of revenue sources, and stickers and games are a great business for us," Idezawa told Reuters in an interview on Friday, "But advertising will be a very important growth-driver." Japan and Thailand are especially ripe for increasing ad-based revenue because of their relatively low rate of digital advertising, Idezawa said. Line's users are mainly in Japan, Taiwan, Thailand and Indonesia. "It's getting saturated in the Japanese market. The question about growth at home is how much Line can sell ads to increase its profit margin," said Masashi Oda, general manager of strategic investment at Sumitomo Mitsui Trust Asset Management. "Whether Line can expand beyond its core market is key. In the US, there is much more competition," he said. Last year, revenue and other operating income at Line rose about 28.3 percent to 120.88 billion yen (£856.1 million). But it reported a net loss of 7.97 billion yen, compared with profit of 2 billion yen in 2014. "I expect net profit to be around 27 billion yen next year," said a Tokyo-based fund manager. "The current share price is about 36 times profit, a bit higher than rivals such as 27 to 28 times at Facebook. So for me, Line's shares have already hit my target price." Morgan Stanley, Goldman Sachs, JP Morgan and Nomura were among underwriters for the IPO. -Reuters