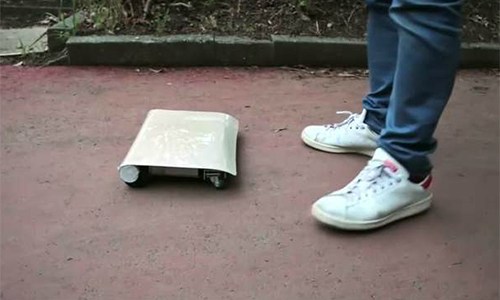 TOKYO – This sleek miniature personal transporter would not look out of place in a sci-fi movie. The WalkCar could soon be seen on the streets of Tokyo. The lightweight aluminium board has a top speed of 10 km an hour, and a range of 12 km when charged. The company behind the pocket-sized transporter. Cocoa Motors, designed it to fit into a small bag. Cocoa Motors CEO, Kuniaki Saito saying: "I thought, "What if we could just carry our transportation in our bags, wouldn't that mean we'd always have it with us to ride on?" and my friend asked me to make one." So no need to worry about a parking space. And it's easy to manoeuvre, the rider just shifting his weight to change direction. Cocoa Motors says it beats bulkier competitors like the Segway and Toyota's Winglet Kuniaki Saito says: "The WalkCar is a totally new product I have started from scratch. So I want to show the world that Japan can also be innovative." It's not just a fun way to get around - the WalkCar has enough power to help people push wheelchairs around with ease. It will launch later this year on fundraising site Kickstarter. If successful, its developers say it will ship next year, with a price tag of about US$800. –Reuters