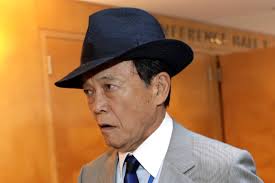 TOKYO (Reuters) - Japanese Finance Minister Taro Aso said on Friday that he wanted the Group of 20 meetings in Osaka next year to focus on identifying problems in the global economy before they could worsen.
“The role the G20 should play next year is to nip crises in the bud before they develop further,” Aso said. Aso said he also wanted next year’s G20 meeting “to promote investment in high-quality infrastructure to ensure economic growth. As the chair, I want to make sure we work toward these ends”. The G20 forum of policymakers from rich and developing countries faces a broad range of problems that could derail global growth, such as trade protectionism, U.S. monetary policy, investment flows from emerging markets, and swings in currencies. Aso said G20 finance ministers and central bankers at last week’s meeting in Argentina discussed downside risks to the global economy and reaffirmed their consensus over currency market issues. But the G20 delegates failed to reach consensus at the meeting in Argentina on how to resolve multiple disputes over US tariff actions, raising fears that the G20 could struggle to reach agreement next year at a time when risks to the global economy could be increasing. The stakes are high for Japan because US President Donald Trump’s administration could ask Japan to take specific measures to lower its trade surplus, which would hurt Japan’s export-oriented economy.