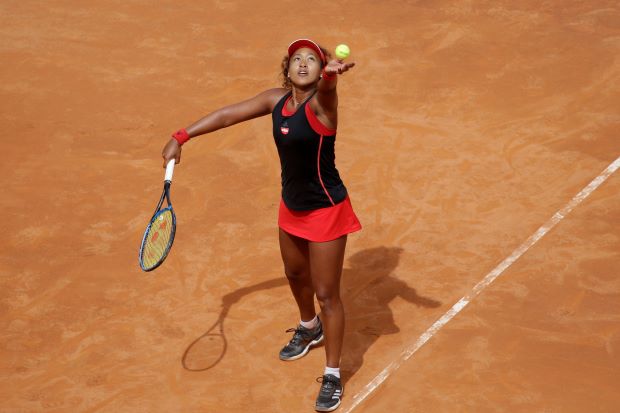 ROME(Reuters) - Rising Japanese sensation Naomi Osaka eased into the second round of the Italian Open with a 6-0 6-3 victory over former world number one Victoria Azarenka, on a day in which local favourite Roberta Vinci called time on her career. Osaka, whose current form could see her mount a strong challenge at the French Open next month, stormed out of the gates, riding her powerful forehand as she pummelled her Belarusian opponent into submission in an hour and 13 minutes. The 20-year-old Japanese was dumped out of last week’s Madrid Open in the first round, but showed she could compete on clay, hitting winners at will as Azarenka crumbled in the face of her relentless pressure. “It didn’t really feel like it was as easy as I think people think it was,” Osaka said after the match. “I’m just really glad I was able to play an opponent like her. Just to even have a chance I think is really great, and I think it was fun.” Next up for Osaka is a second-round clash with world number one Simona Halep. Roberta Vinci was beaten 2-6 6-0 6-3 by Serbia’s Aleksandra Krunic in an emotionally charged encounter in front of a packed crowd on Court Pietrangeli. The 35-year-old had announced her intention to retire from tennis after the tournament, and her exit brings down the curtain on her 20-year career in the sport. “I tried to say, ‘Okay, this is probably the last day, so try to enjoy, and try to smile,” she told reporters after the match. “I was happy about the crowd, and my parents, my team and all my friends were there. I lost, I know, but I was happy - and this is what I wanted.” American Coco Vandeweghe, the 12th seed, suffered a shock 6-1 6-1 opening round defeat by Estonia’s Anett Kontaveit, but Vandeweghe’s compatriot, Madison Keys eased past Russian Anastasia Pavlyuchenkova 6-4 6-1. Britain’s Johanna Konta battled back from a break down in either set to see off the challenge of Magdalena Rybarikova 6-4 6-3 and improve her head-to-head record against the Slovak to four victories without a single defeat. US Open champion Sloane Stephens takes on Czech Barbora Strycova in the day’s last match.