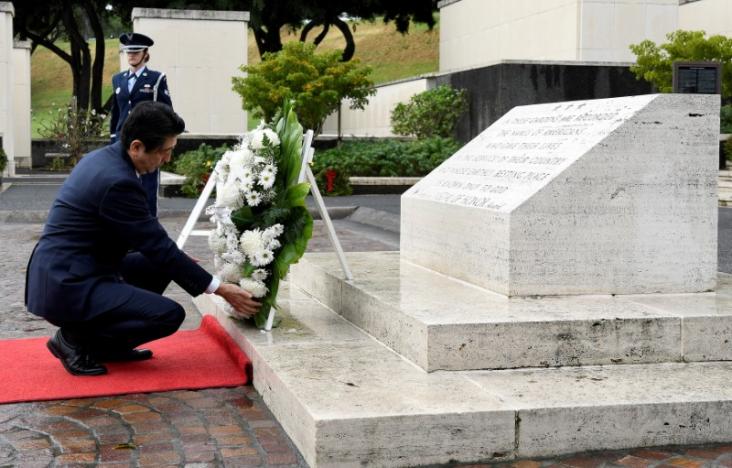 HONOLULU - Japanese Prime Minister Shinzo Abe stopped at several memorials in Hawaii, one day before he will visit the site of the 1941 bombing of Pearl Harbor during a trip intended to show a strong alliance between his country and the United States. Abe made no public remarks and stood in silence before a wreath of flowers at the National Memorial Cemetery of the Pacific, a memorial to people who died while serving in the US Armed Forces. Abe, joined by two of his Cabinet members, bowed his head before wreaths of white flowers and greenery laid at the feet of stone monuments at Makiki Cemetery in Honolulu dedicated to Japanese who settled in Hawaii in the 1800s. The crowning event of the trip comes Tuesday, when Abe and US President Barack Obama will visit Pearl Harbor, the site of the Japanese attack 75 years ago that drew the United States into World War II. Obama, who was born in Hawaii, is spending his winter vacation there. Abe does not plan to apologise for the 1941 attack but to console the souls of those who died in the war, his aides said this month. Japan hopes to present a strong alliance with the United States amid concerns about China's expanding military capability. Japan was monitoring a group of Chinese warships that entered the top half of the South China Sea earlier on Monday. Japanese leaders hope to send a unity message as well to President-elect Donald Trump, who triggered concerns before his Nov. 8 election by opposing the US-led Trans-Pacific Partnership trade pact and threatening to force allied countries to pay more to host US forces. Amid wind and rain on Monday, Abe presented a wreath at the armed forces memorial located at Honolulu's Punchbowl Crater. After a moment of silence, he signed a guestbook and then stopped at the grave of former US Senator Daniel Inouye, who fought in World War II in Europe and whose parents were Japanese. He died in 2012. Abe's visit will come seven months after Obama became the first serving U.S. president to visit the Japanese city of Hiroshima, where the United States dropped an atomic bomb in the closing days of the war in 1945. -Reuters