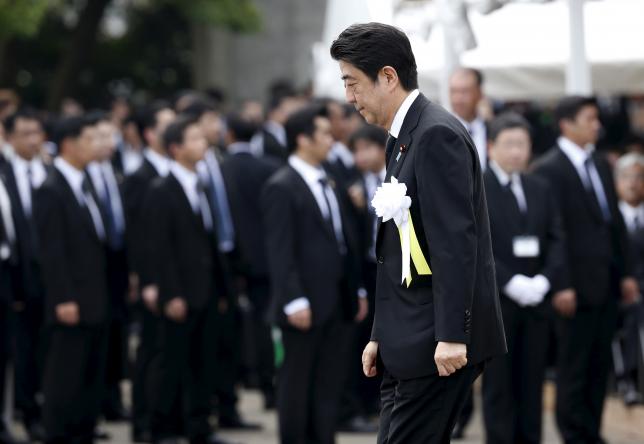 TOKYO - Japanese Prime Minister Shinzo Abe was poised on Friday to issue a statement marking the 70th anniversary of the end of World War Two, remarks that will be closely analysed abroad to see whether he dilutes past apologies over the conflict. The legacy of the war still haunts relations with China and South Korea, which suffered under Japan's sometimes brutal occupation and colonial rule before Tokyo's defeat on Aug. 15, 1945. Beijing and Seoul have made clear they want Abe to stick to a landmark 1995 "heartfelt apology" by then-premier Tomiichi Murayama for suffering caused by Tokyo's "colonial rule and aggression". Abe, seen by critics as a revisionist who wants to play down the dark side of Japan's wartime past, has said he will express "deep remorse" for the war and uphold past government statements, including Murayama's landmark remarks. But he has also made clear he wants to applaud Japan's post-war peaceful record and outline its future role as an active player on the global stage. "Based on a vow that we must never again to repeat the horrors of war, we have built a peaceful, democratic and free Japan," Kyodo news agency quoted Abe saying after visiting the grave of his father, a former foreign minister, in southwestern Japan. Abe is leaning towards including key words from Murayama's statement including "apology", "aggression" and "colonial rule", Japanese media have said. But he may do so in an indirect way that attempts to satisfy a domestic conservative base fed up with what it considers as a humiliating cycle of apologies. Abe also needs to satisfy ally Washington and his dovish junior coalition partner with remarks that do not inflame regional tension, and likely wants to keep up a thaw in ties with China, ahead of a possible visit to Beijing in September. Trying to meet such competing demands could result in what the Nikkei business daily called "an ambiguous mixed bag". "Let's face it, the audience is the United States," said Andrew Horvat, visiting professor at Josai International University in Tokyo. "If not for the United States, I think Mr. Abe would be less careful in what he says." Abe's statement comes as he pushes for a more robust defence policy through measures domestic critics say violate Japan's pacifist constitution. Public doubts about the bills have triggered a slide in Abe's ratings to below 40 percent. Washington has welcomed the changes, which Abe says are needed to meet new challenges, including a more assertive China. -Reuters