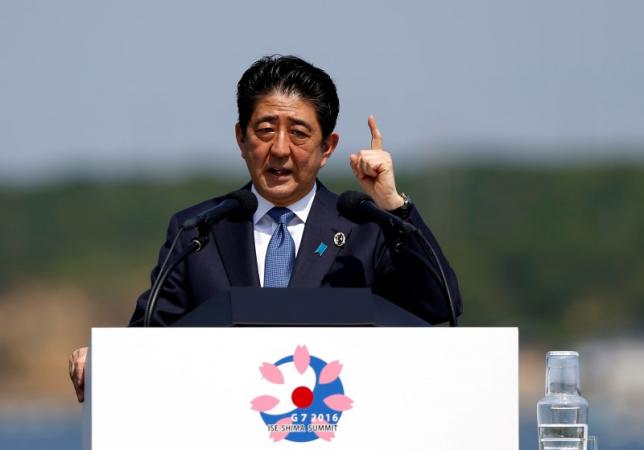 TOKYO - Japanese Prime Minister Shinzo Abe plans to delay an increase in sales tax by two and a half years, a government official said on Sunday, as the economy sputters and Abe prepares for a national election. Abe told Finance Minister Taro Aso and the secretary general of his ruling Liberal Democratic Party, Sadakazu Tanigaki, on Saturday of his plan to propose delaying the tax hike for a second time, until October 2019, said the official, who was briefed on the meeting. The prime minister, who has promised to announce steps on Tuesday to spur economic growth and promote structural reform, is also expected to order an extra budget to fund stimulus measures, just two months into the fiscal year and on the heels of a supplementary budget to pay for recovery from recent earthquakes in southern Japan. After chairing a summit of Group of Seven leaders on Friday, Abe said Japan would mobilise "all policy tools" - including the possibility of delaying the tax hike - to avoid what he called an economic crisis on the scale of the global financial crisis that followed the 2008 Lehman Brothers bankruptcy. "There is a risk of the global economy falling into crisis if appropriate policy responses are not made," Abe told a news conference after the summit. To play its part, Japan "must reignite powerfully the engine of Abenomics," he said, referring to his easy-money policies aimed at getting Japan out of two decades of deflation and fitful growth. Abe has long said he would proceed with a plan to raise the tax rate to 10 percent from 8 percent next April unless Japan faced a crisis on the magnitude of the Lehman shock. He said the G7 "shares a strong sense of crisis" about the global outlook, with the most worrisome risk being a global contraction led by a slowdown in emerging economies like China. Other G7 leaders, however, appeared to differ with Abe on the risk of a global crisis, fuelling comment that Abe was using the G7 to justify delaying the painful tax hike. Abe will announce his intention to delay the tax hike by the end of the current session of parliament on Wednesday, after meeting with Komeito, the LDP's junior coalition partner, the government official told Reuters. Japan fell into recession after Abe raised the tax from 5 percent in April 2014 hoping to curb government debt, and consumption has still not recovered. Despite massive monetary easing by the Bank of Japan and a series of government spending packages Japan's growth is weakening. Core consumer prices and exports fell in April, and manufacturing shrank at the fastest pace since Abe took office in 2012. A Reuters poll last week showed most companies expect no escape from deflation for the foreseeable future. Despite the fresh fiscal stimulus, however, Abe told Aso and Tanigaki that will stick with his pledge to achieve a budget surplus, excluding debt-servicing costs and income from bond sales, by the fiscal year ending in March 2021. -Reuters