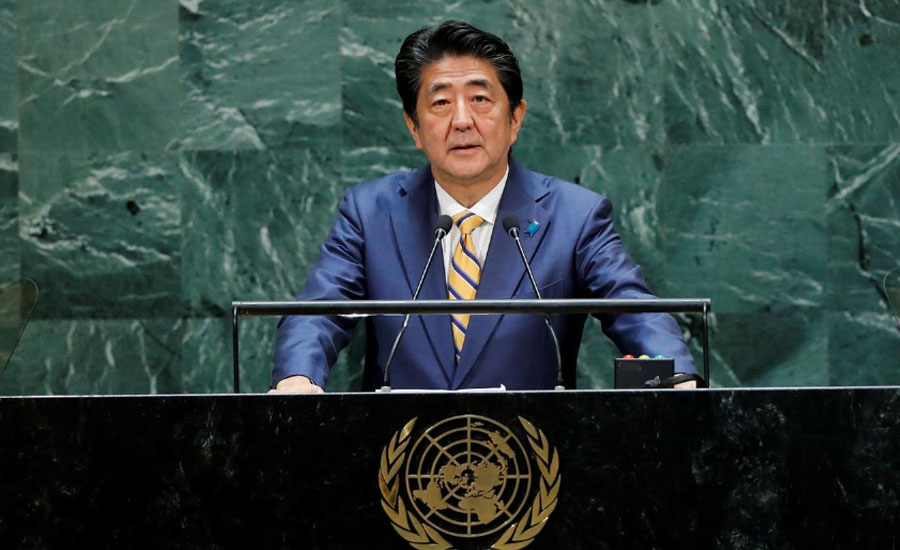 NEW YORK (Reuters) - Japanese Prime Minister Shinzo Abe expressed concerns about the Middle East situation and urged Iran to take actions “grounded in the wisdom derived from its rich history”. In a speech to the United Nations General Assembly, Abe called the Sept. 15 attacks on Saudi oil facilities “an extremely contemptible crime that holds the international economic order hostage”. He did not, however, specify who Japan thought was behind the attacks, which Riyadh, Washington and the leading EU powers have blamed on Iran. Japan has traditionally had friendly ties with Iran and Abe has been trying to ease the tensions between Tehran and Tokyo’s closest ally, Washington. “It is my own unchanging role to call on Iran as a major power to take actions that are grounded in the wisdom derived from its rich history,” Abe said, noting that Japan shared concerns regarding the Middle East situation. Abe met Iranian President Hassan Rouhani earlier in the day. Abe also said he supported U.S. President Donald Trump’s approach to North Korea. “The approach by which the two leaders talk candidly with each other and try to work out the issues at hand while seeing a bright future ahead has changed the dynamics surrounding North Korea,” he said. He repeated that he wants to meet North Korean leader Kim Jong Un “without attaching any conditions”. On the other hand, Iranian President Hassan Rouhani will give a speech at the United Nations General Assembly on Wednesday that will likely determine whether Tehran will re-engage with the US to ease the heightened tension between the longtime enemies. The confrontation between Tehran and Washington has ratcheted up since last year, when US President Donald Trump withdrew from Iran’s 2015 nuclear deal with major powers and reimposed sanctions that have crippled that country’s economy. Rouhani, the nuclear pact’s architect, has left the door open to diplomacy, saying that if sanctions were lifted, Washington could join nuclear talks between Tehran and other powers.