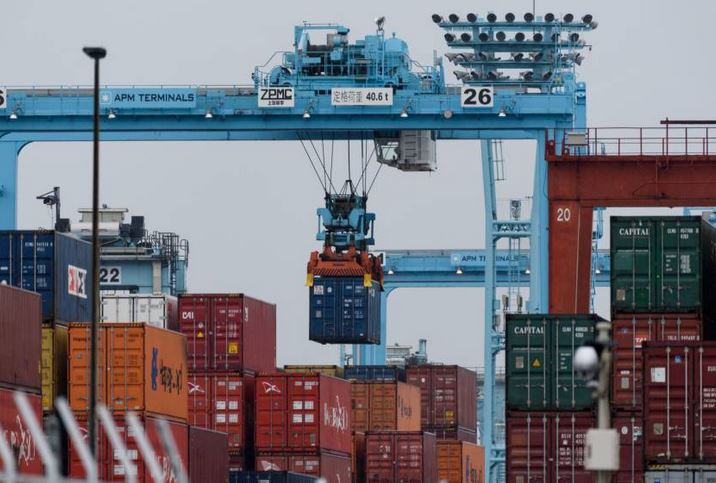 TOKYO (Reuters) - Japan’s exports are expected to have risen for a 17th straight month in April thanks to solid global demand, a Reuters poll showed on Friday. Exports likely grew 8.1 percent in April from a year ago, the poll of 16 economists found, accelerating from a 2.1 percent rise in March, supported by shipments of autos and capital goods such as machinery. Imports were expected to rise 9.6 percent last month from a year earlier after oil price gains drove up import costs, the poll showed, compared with a 0.6 percent decline in March. The trade surplus for the month was seen at 405.6 billion yen ($3.66 billion). “Although exports for January-March slowed down, there is no doubt that the global economy is on a moderate recovery path and export volumes were maintained,” said Takeshi Minami, chief economist at Norinchukin Research Institute. “Domestic demand including consumer spending likely started picking up from April, so both exports and imports are expected to recover.” Japan’s economy shrank an annualised 0.6 percent in January-March, the first contraction in nine quarters, led by declines in investment and consumption as well as weaker export growth. Many economists project the economy will recover but the pace of the growth may be moderate. Potential global fallout from trade frictions between the United States and China are worrying factors in the outlook for Japan’s export-reliant economy, poll respondents said, though there has not been a notable negative impact on Japan yet. The finance ministry will publish the trade data at 8:50 a.m. Tokyo time on May 21 (2350 GMT, May 20). Next week’s key data also includes the Tokyo area’s core consumer price index, which includes oil products but excludes volatile fresh food prices. Tokyo’s core CPI likely rose 0.6 percent in May from a year earlier, which is the same rate of growth seen in April, the poll showed. “Price gains in oil-related products likely contributed to the core CPI index,” an SMBC Nikko Securities analyst said in the survey. “It will be some time before we see the wage increase from the annual spring wage negotiations this year supporting price rises.” The internal affairs ministry will publish the core CPI index at 8:30 a.m. Tokyo time on May 25 (2330 GMT on May 24).