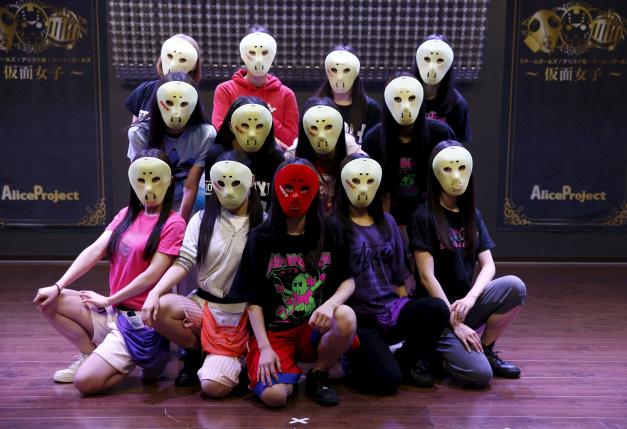 TOKYO – Standing out from Japan's myriad of girl bands can be a daunting task, but one group, the "Kamen Joshi", or "Masked Girls" in Japanese, has found the answer by hiding behind masks. As many as 15,000 people flocked to a concert by the band late last year, showing how its fan base has grown in the three years since it first started, when it struggled to fill a 400-seat theater. One of its first breakthrough songs, "Genkidane", hit the top of the charts in January 2015, with more than 200,000 records sold in the first week of release, said music company Oricon Style, setting a record for a female indie band in Japan. The band, made up of 18 members in three separate groups, is based in Tokyo and performs across Japan and in some Asian cities. The masks enhance the band's appeal, said fans who attended a recent concert in the Japanese capital. "It is unique that even though they are idols, they perform while hiding their faces with masks," said one spectator, Akihiro Kuji. Not all of the band's songs are performed in masks, but band members say they prefer to keep their faces hidden. "We are happier if we are asked to perform a live session with our masks on, rather than asked to take it off," said a band member who uses the stage name Nodoka Sakura. "These masks are like our lives. We can't go on stage live without them." What began as a promotional gimmick for the band has evolved into a kind of raison d'être. "By wearing this mask, we become invincible. We can't live without it anymore," said a band member with the stage name Moa Tsukino. –Reuters