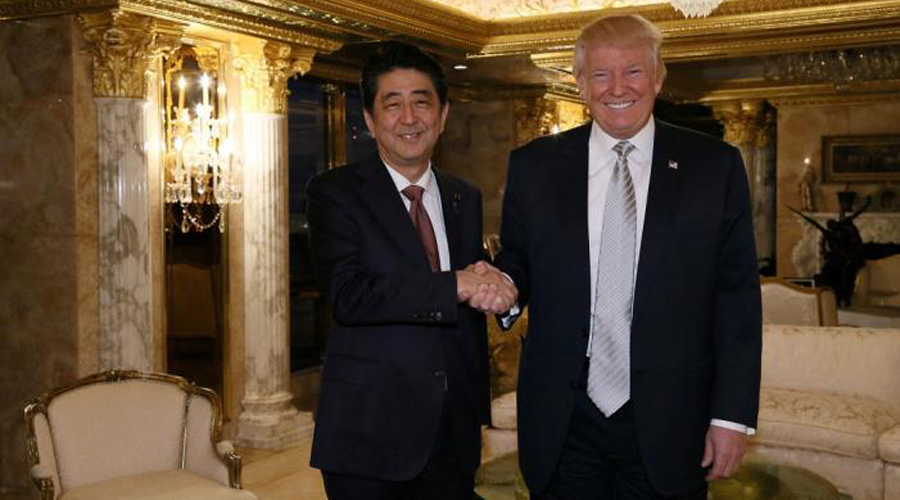 NEW YORK - Japan's Prime Minister Shinzo Abe described Donald Trump as a "trustworthy leader" after meeting the US president-elect to get clarity on statements Trump had made while campaigning that had caused concern about the alliance. Abe, speaking after the hastily arranged 90-minute meeting at Trump Tower in Manhattan, reporters: "The talks made me feel sure that we can build a relationship of trust." But he would not disclose specifics because the conversation was unofficial. Japan's leadership has been nervous about the future of an alliance that is core to Tokyo's diplomacy and security. Trump had fanned worries in Tokyo and beyond with comments on the possibility of Japan acquiring nuclear arms, demands that allies pay more for keeping US forces on their soil or face their possible withdrawal, and his opposition to the US-led 12-nation Trans-Pacific Partnership (TPP) free trade pact. Abe had worked closely with President Barack Obama on the TPP trade pact, which was part of Obama's push to counter the rising strength of China and a pillar of Abe's economic reforms. "Alliances cannot function without trust. I am now confident that President-elect Trump is a trustworthy leader," said Abe, describing the talks as "candid" and held in a "warm atmosphere". Abe gave Trump a golf driver and received golf-wear in return, Japanese officials said. Photographs taken inside the ornate meeting room at Trump Tower showed Abe accompanied only by an interpreter and Trump by his daughter Ivanka, her husband and Trump adviser Jared Kushner, and Retired Lieutenant General Michael Flynn whom a senior Trump official said on Thursday had been offered the national security adviser position. Abe said he had agreed to meet again with Trump "at a convenient time to cover a wider area in greater depth." It was unclear if that would happen before Trump's inauguration on Jan. 20. Trump official Kellyanne Conway told CBS earlier on Thursday that "any deeper conversations about policy and the relationship between Japan and the United States will have to wait until after the inauguration." Trump officials did not immediately comment following the meeting with Abe. COMMON GROUND Back in Tokyo, Finance Minister Taro Aso commented: "The meeting ran longer than planned, which means that they were on the same wavelength and it went well." Some of Trump's campaign rhetoric suggested an image of Japan forged in the 1980s, when Tokyo was seen by many in the United States as a threat to jobs and a free-rider on defence. A Trump adviser who spoke earlier in the week, however, stressed a more positive view and credited Abe with making changes. "Frankly, the prime minister has been more assertive and forthright in trying to make those changes to Japan’s global posture," he said. Trump, a brash billionaire real estate magnate, and Abe, a political blue blood, share a stated desire to raise their countries' global standing and both have support from right-wing constituencies. Abe has boosted Japan's overall defence spending since taking office in 2012. He has also stretched the limits of its pacifist postwar constitution to allow the military to take a bigger global role. Japan's defence spending, though, still stands at just over 1 percent of GDP compared with more than 3 percent in the United States. Abe was expected to see Obama at an Asia-Pacific summit in Peru on the weekend. Hours before Abe and Trump met, Obama's secretary of state, John Kerry, and Japanese Foreign Minister Fumio Kishida met in Lima to discuss the Paris climate accord - a deal Trump has pledged to exit. Diplomats and analysts say that however good the atmospherics, it will be hard to assess Trump's policies on security issues ranging from overseas deployments of US troops, China's maritime assertiveness and the North Korean nuclear threat until Trump makes key appointments. -Reuters