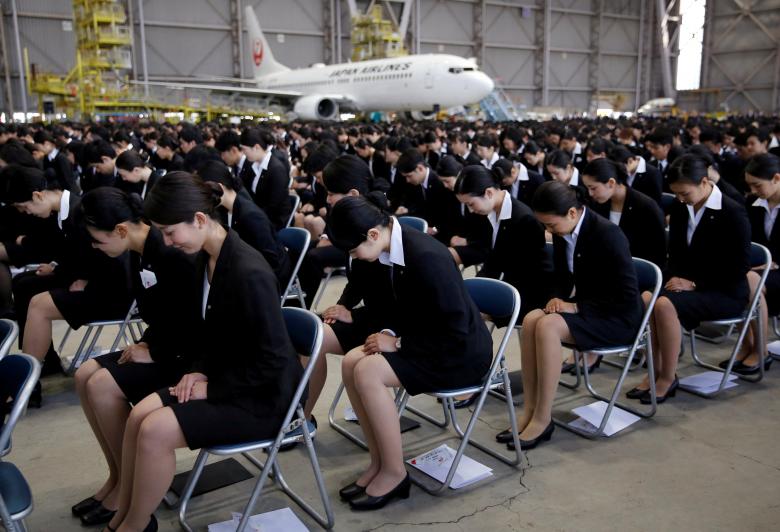 TOKYO - Labour demand in Japan rose to its strongest in more than 40 years while the unemployment rate held steady at a two-decade low in April, offering hope that a tight labour market will eventually spark a turnaround in weak consumer spending.

Separate data showed household spending fell more than expected in April due to lower spending on cars and education fees as consumer spending continues to lag behind improvement in other areas of the economy, such as exports and factory output.

Such a tight labour market could temper pessimism about consumer spending and bolster the Bank of Japan's argument that rising demand for workers will eventually spur inflation.

"As more people get work, this should support consumer spending in the future."

The jobs-to-applicants ratio rose to 1.48 in April from 1.45 in the previous month, meaning 1.48 vacancies are available for each person seeking a job. Labour demand has been rising steadily due to a shortage of workers and increased activity in services and construction.

The last time labour demand was this strong was in February 1974, when the ratio was 1.53.

The jobless rate held steady at 2.8 percent in April, matching the lowest since June 1994.

The BOJ last month maintained its projection that price growth will reach its 2 percent target in fiscal 2018 on the assumption that a tight labour market will push up wages, but not all economists are convinced.

Economists say some companies are opting to cut business hours, which makes it difficult for wages to rise.

"Some companies are scaling back the level of services they offer instead of going out and getting the workers they need," said Hiroaki Muto, economist at Tokai Tokyo Research Center Co.

"This is not likely to lead to higher take-home pay."

Japanese household spending fell 1.4 percent in April from a year earlier in price-adjusted real terms, more than the median estimate for a 0.7 percent annual decline.

Excluding spending on autos and housing, household spending rose a seasonally-adjusted 3.5 percent in April from the previous month versus a 2.9 percent decline March, showing consumer spending is stronger than the headline figures, Miyazaki said.

Separate data showed retail sales rose 3.2 percent in April from a year earlier, more than the median estimate for a 2.3 percent increase, but some economists say a small sample size may exaggerate the percentage change in this data.

Under a new policy framework adopted last year, the BOJ has pledged to guide short-term interest rates to minus 0.1 percent and cap the 10-year government bond yield around zero percent.

Consumer prices rose on 0.3 percent in April from a year ago, well below the BOJ's 2 percent inflation target.

However, growing signs of strength in exports and factory output have presented the BOJ with a new communications challenge, pushing it to be clearer with markets on how it might dial back its stimulus - even though such action remains a long way off. -Reuters