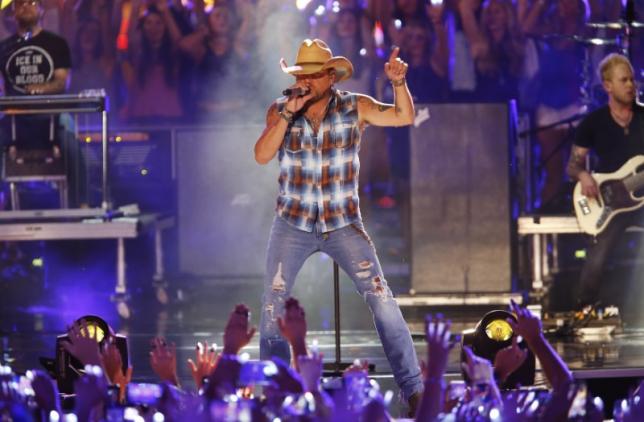 LOS ANGELES - Country singer Jason Aldean debuted at the top of the weekly US Billboard 200 album chart, edging out rapper Drake's long-standing "Views." Aldean's "They Don't Know" sold 138,000 album units, which comprised 131,000 albums, 62,000 song sales and 1.4 million online streams, according to figures from Nielsen SoundScan. The Billboard 200 album chart tallies units from album sales, song sales (10 songs equal one album) and streaming activity (1,500 streams equal one album). The figures for Aldean's record reflect the trend for country music listeners to buy full albums over single songs and streaming music. In comparison, Canadian R&B singer Drake's "Views" climbed one spot to No. 2 this week on the strength of streaming activity. "Views" sold just 8,400 albums and 77,000 songs in its 20th week on the chart, but was streamed nearly 64 million times. Other new entries in the top 10 of the Billboard 200 chart this week include British alt-rockers Bastille at No. 4 with "Wild World," folk group Head & The Heart at No. 5 with "Signs of Light" and rocker Jack White at No. 8 with "Jack White Acoustic Recordings." Also new on the chart this week is veteran British rockers The Beatles' "Live at the Hollywood Bowl" at No. 7. The record is a remastered re-release of the band's 1977 album featuring live performances at the Hollywood Bowl venue from 1964 and 1965. The new record coincides with "The Beatles: Eight Days a Week - The Touring Years," a new documentary released last week on the Fab Four's touring years, directed by Ron Howard. -Reuters