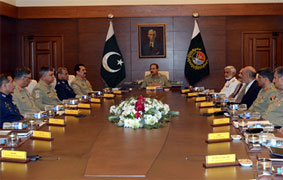 RAWALPINDI (92 News) – Chairman Joint Chiefs of Staff Committee (CJCSC) General Rashad Mahmood has said that the Army will fully respond to any aggression. He was presiding over a meeting of the Joint Chiefs of Staff Committee at Joint Staff Headquarters, Rawalpindi on Tuesday. Chief of Army Staff General Raheel Sharif, Chief of Naval Staff Admiral Muhammad Zakaullah, Air Chief Marshal Sohail Aman, Chief of Air Staff, Secretary Defence and senior military officers from the three services also attended the meeting. JCSC is a quarterly meeting of senior military leadership to carry out the assessment and evaluation of operational preparedness of all three services especially in the context of articulation within the Armed Forces. The participants appreciated the strides against the menace of terrorism and reviewed the progress made in the ongoing operations against terrorists. Issues pertaining to national security, emerging regional geo-strategic environment, and joint military education and training were also dilated upon by the forum. The satisfaction over the standard of preparedness of Armed Forces to take on upcoming challenges being faced by the country was also expressed in unequivocal terms. The participants also appreciated the relief and rescue operations carried out by Armed Forces in different parts of the country during the recent floods. At the end, the forum reaffirmed the resolve of Armed Forces to respond to entire spectrum of threat in the most befitting manner as per comprehensive security strategy.