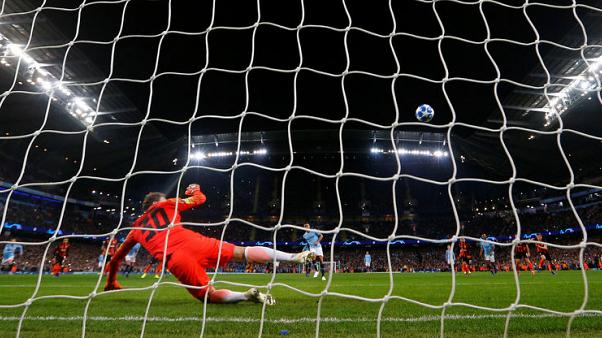 MANCHESTER, England (Reuters) - Gabriel Jesus hit a hat-trick, including two penalties, as Manchester City marched closer to the knockout stage of the Champions League after crushing Ukraine’s Shakhtar Donetsk 6-0 at the Etihad Stadium on Wednesday. The result left City within a whisker of the last 16, as Group F leaders with nine points, three ahead of second-placed Olympique Lyonnais who drew 2-2 with Hoffenheim. The Germans are third on three points, while Shakhtar are bottom on two and City will book their place in the next round with a win or a draw in Lyon on Nov. 27. “Unfortunately we haven’t qualified, but we are so close and will try to maintain this level. Maybe it will help keep us focused,” said City manager Pep Guardiola. The Spaniard’s team are simply destroying opponents at the moment and have scored 19 goals in their past four home games in all competitions. Even with Argentine striker Sergio Aguero left on the bench and midfield playmaker Kevin de Bruyne injured, they were simply too strong for Shakhtar. Riyad Mahrez created the 13th-minute opener, toying with the Shakhtar defence before his low ball, across the face of goal was turned in by skipper David Silva. Guardiola’s side, who enjoyed a 6-1 win on Sunday over Southampton in the Premier League, doubled their advantage in the 24th minute after a comical penalty award that left the visitors shaking their heads in disbelief. Raheem Sterling burst into the penalty area and went down, without any contact or even a challenge, after driving his foot into the ground, as he attempted a chip. Hungarian referee Viktor Kassai could not have seen the incident clearly as he awarded the spot-kick and Brazilian Jesus slotted home. Both managers said after the game that the referee had made a mistake, with Shakhtar boss Paulo Fonseca laughing as he described the decision as “ridiculous”. Sterling said he had apologised to the official, but while he may be embarrassed to watch that replay on television, he will take great pleasure from what came next. The England winger scored a brilliant third after leaving two Shakhtar defenders standing as he flew out of midfield and then beat Andriy Pyatov with a superb shot into the corner. Jesus added the fourth in the 72nd minute, again from the penalty spot, after Taras Stepanenko brought down David Silva in the box before Mahrez finished off a well-worked counter-attack six minutes from the end. Mahrez then set up Jesus for his hat-trick, a perfect through ball allowing the Brazilian to deliver a deft chip over Pyatov and into the goal.