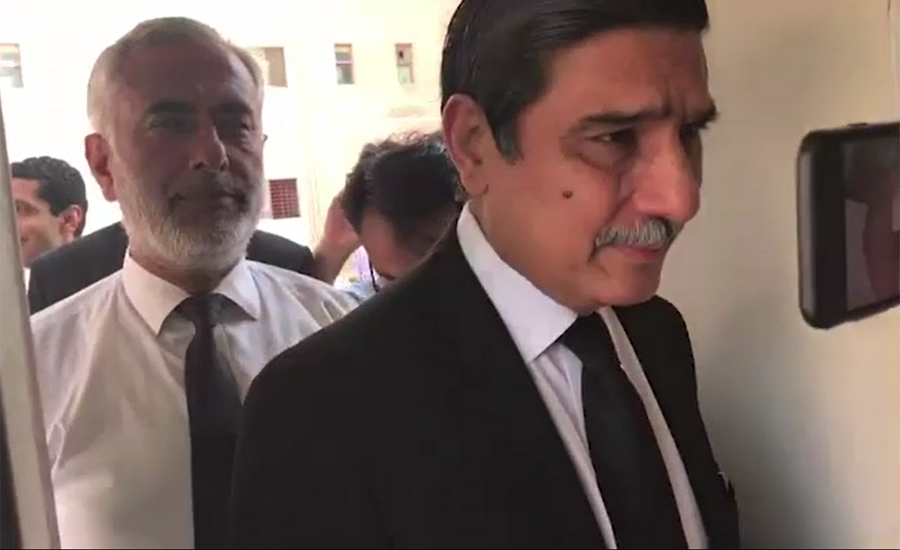 ISLAMABAD (92 News) – Khawaja Haris, the counsel of former prime minister Nawaz Sharif, Haris on Monday has argued that the joint investigation team (JIT)'s report is unacceptable as evidence against his clients in Avenfield property reference. Accountability Court Islamabad has resumed hearing of Avenfield reference against the Sharif family. Judge Muhammad Bashir is hearing the case. Khawaja Haris is submitting his concluding arguments in the case. Haris began presenting his arguments, stating that he would respond to the second part of the statement of NAB's star witness Wajid Zia. Khawaja Haris argued before the accountability court that the joint investigation team (JIT)'s findings were based on an investigation report that couldn't be present as evidence against his clients in Avenfield property reference. The defence lawyer argued that the investigation officer's opinion could not be considered as acceptable evidence. Haris argued that Wajid Zia was under influence because of giving his opinion. He asserted that the mini transaction of Gulf Steel mill was not any linked with Nawaz Sharif. He added that all the matters were related to the payments and records. The defence lawyer further said that all the matters are related to Tariq Shafi, the former premier's cousin, regarding payments but he was not declared as accused or witness regarding this case. In the start of hearing, accountability court Judge Muhammad Bashir observed that none of the accused were in court. Nawaz Sharif's lawyer informed the court that Captain (r ) Safdar would appear in court shortly. He further said that Nawaz and his daughter Maryam were both abroad, whereas the accountability court allowed a three-day exemption to former prime minister Nawaz Sharif and his daughter Maryam in the Avenfield reference against the Sharif family. Earlier on Thursday hearing, Haris informed the court that the Panama case joint investigation team (JIT) was formed as an investigative body. He objected that JIT’s head Wajid Zia included those things in the report which were not linked with the case. khawaja Haris said that there are some unresolved issues mentioned in the report, however, the court has to decide after the complete debate on these issues. He argued that the opinion consisted in the investigative report so this should not be taken as acceptable testimony. Responding to the counsel’s objections to the JIT report, the judge remarked that Haris should have objected to specific portions of the report instead of the overall document. On Wednesday, in his arguments, Haris asserted that Nawaz did not accep ownership of the London properties. He further said that the burden of proof lies on the prosecution. “Here the prosecution has put the burden of the proof on the defence”.