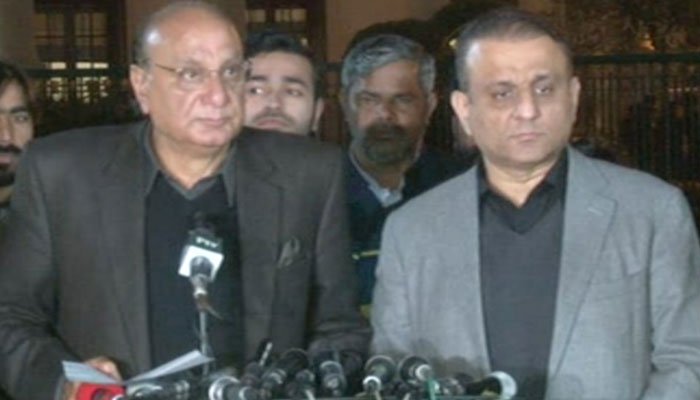 LAHORE (92 News) – Punjab Law Minister Raja Basharat announced on Tuesday announced that the initial report of joint investigation team (JIT) has held officers of the Counter-Terrorism Department (CTD) responsible for the killings of three members of the same family. Speaking to the journalists after a high-level meeting on the Sahiwal incident, the minister said that the JIT report found no link between Khalil family and terrorism, and hold the CTD officials behind their tragic extra-judicial killings. The law minister termed the Sahiwal alleged encounter as ‘100 percent correct’. He also said that the further investigation would be launched about the matter of Zeeshan, who already declared terrorist by the provincial government. He said the head of the JIT had sought some time to complete the investigation to ascertain the facts about Zeeshan, one of the persons killed in the operation whom the officials have been terming as ‘terrorist’ since day one. Punjab govt decides to remove top police officials Raja Basharat said that the Punjab government has decided to remove several officers of the CTD upon recommendations of the investigation team. The law minister said the CTD Additional IGP and the DIG Sahiwal had immediately been removed from his post, while DIG CTD and the SSP, who led the Sahiwal encounter, were suspended. He also said that challan of five CTD officials will be presented before the anti-terrorism court (ATC) tomorrow (on Wednesday) and have been charged under Section 302 of Pakistan Penal Code (PPC). The minister said that the government will hold an in camera briefing tomorrow on the incident. Basharat termed it as a ‘test-case’ for Punjab Government, and said that the government was committed to provide justice to the bereaved families. “In past, people used to wait for years to get justice, but the current government would provide justice to the victims”, he said. JIT submits initial report The JIT probing the incident in which four people were killed had submitted its preliminary report to the Punjab government. A high-level meeting headed by Punjab Chief Minister Usman Buzdar was held to review the report. Punjab minister Abdul Aleem Khan, provincial law minister Raja Basharat, the chief secretary and additional chief secretary for home, Punjab Inspector General of Police Amjad Javed Saleemi as well top officials from relevant agencies attended the meeting. Additional Inspector General (AIG) Ijaz Hussain Shah, who headed the JIT, was in attendance as well. The deadline given to the JIT by Punjab Chief Minister Usman Buzdar has been expired. Talking to the media at the site, JIT chief Ijaz Shah said that they have not yet reached a conclusion. “We cannot give the report in two days. Six officials of the CTD are in custody. Statements of 3-4 witnesses have been recorded,” he added. He said that the JIT had been formed under Article 80 A. “The results have to be given in 30 days.

On Monday, the names of the Counter Terrorism Department (CTD) personnel – involved in an alleged encounter in Sahiwal – have been disclosed. According to reports, the CTD team was led by Sub-Inspector (SI) Safdar Hussain, whereas Ahsan, Muhammad Ramzan, Saifullah and Hasnain Akbar were also present in the team. The privy sources said that the JIT team interrogated the team lead and asked him why the personnel opened fire on car despite of stopping the car? Meanwhile, the CTD other team members also recorded their statements on the Sahiwal alleged encounter.

On Sunday, The first information report (FIR) against 16 unknown Counter Terrorism Department (CTD) officials has been lodged under terrorism and murder sections at the Yousafwala police station. According to the details garnered, the FIR was lodged under 302 and Section 7 of the Anti-Terrorism Act (ATA) on behalf of Khaleel’s brother Jaleel. In the FIR, ten officials were in uniform and six without uniform.