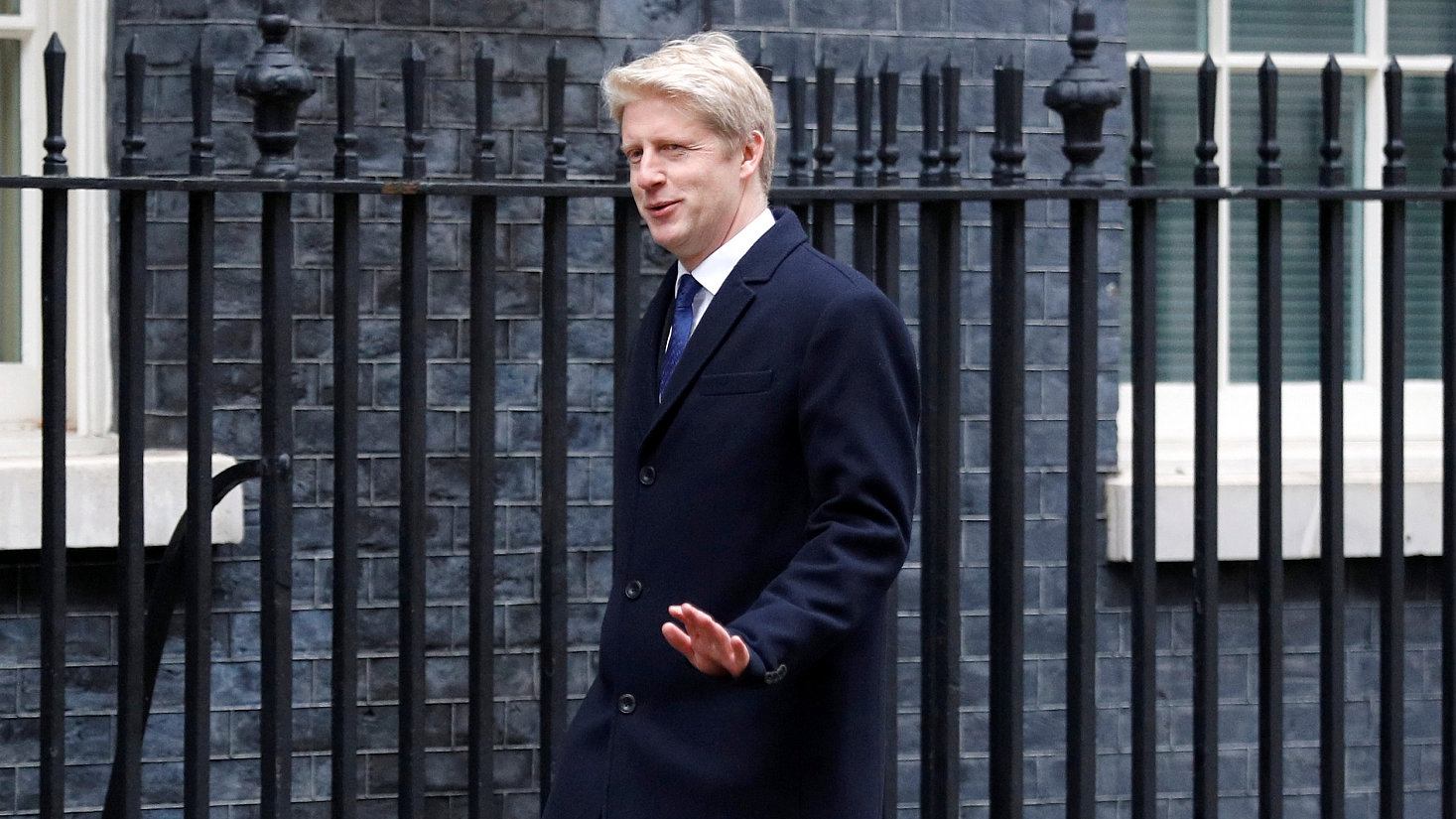 LONDON (Reuters) - Jo Johnson, the younger brother of Boris, resigned from British Prime Minister Theresa May’s government , calling in a withering critique for another referendum to avoid her Brexit plans unleashing Britain’s greatest crisis since World War Two. Quitting as a junior transport minister, Johnson called May’s Brexit plans delusional and said he could not vote for the deal she is expected to unveil in parliament within weeks. “Britain stands on the brink of the greatest crisis since the Second World War,” said Johnson, a former Financial Times journalist who voted to stay in the EU in the 2016 referendum. Johnson, 46, called it the worst failure of statecraft since the 1956 Suez canal crisis, in which Britain was humiliatingly forced by the United States to withdraw its troops from Egypt. “To present the nation with a choice between two deeply unattractive outcomes, vassalage and chaos, is a failure of British statecraft on a scale unseen since the Suez crisis,” he said. “Given that the reality of Brexit has turned out to be so far from what was once promised, the democratic thing to do is to give the public the final say,” he added. Johnson’s criticism underscored the travails that May faces in getting any Brexit divorce deal, which London and Brussels say is 95 percent done, approved by her own fractious party. The pound sank to a day’s low beneath $1.30 on the resignation and also fell against the euro. It was unclear whether others would follow Johnson out of government. In the June 2016 referendum, 17.4 million voters, or 51.9 percent, backed leaving the EU while 16.1 million, or 48.1 percent, backed staying. Johnson wants a three-way referendum giving the people a choice between remaining in the EU, May’s deal and no deal. May’s office rejected his call, saying Britain would not hold a second referendum on its EU membership “under any circumstances”.

Johnson is the 14th minister to have resigned from government since November last year and the most senior to have called for another referendum in his leaving statement. His resignation was published after May spent much of the day in France and Belgium, laying wreaths alongside fellow leaders to mark the centenary of the end of World War One. As negotiations with Brussels enter their final fraught stage, May’s approach is under fire from all sides of the divisive Brexit debate. Many politicians are unhappy with her compromise plans to maintain the free trade of goods with the EU, which they say will leave Britain subject to decisions in Brussels without any input. In his 1,600-word resignation statement, Johnson said May’s proposed deal would leave Britain in a “far worse” negotiating position than now, adding he also knew from his work at the Department of Transport how painful a “no deal” Brexit would be. Boris Johnson, a leading supporter of Brexit who quit as foreign secretary in July, praised his brother’s decision, saying they were “united in dismay” - despite their opposing views on Brexit - over May’s handling of the negotiations. May is expected to hold a cabinet meeting later this month in the hope of securing ministers’ support for her negotiating stance and hopes to strike an exit deal with the EU in the next few weeks. Compounding May’s problems on Friday, the Northern Irish party that props up her minority government cast her Brexit negotiation as a betrayal and said it could not support any deal that divided the United Kingdom. The Democratic Unionist Party interpreted a promise made by May in a letter that she would never let a division of the UK “come into force” as an admission that such a clause would be included in a final deal. As campaigners step up pressure on the government calling for the public to be given another say on Brexit, the opposition Labour Party leader Jeremy Corbyn dashed campaigners’ hopes he could back another referendum. Asked by German magazine Der Spiegel if he would stop Brexit if he could, Corbyn said: “We can’t stop it. The referendum took place....What we can do is recognise the reasons why people voted leave.”