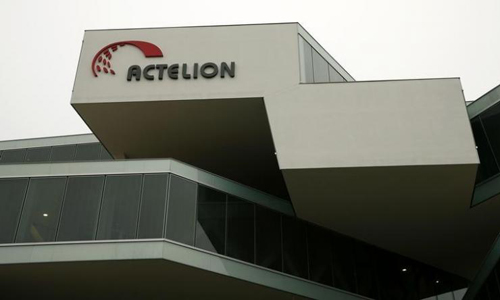 ZURICH/FRANKFURT- U.S. healthcare company Johnson & Johnson said on Friday it was in preliminary talks with Actelion about a potential takeover of Europe's largest biotech firm, currently valued at about $20 billion.
Lung disease specialist Actelion confirmed it had been approached and said there was no certainty a deal would occur. An acquisition of the Swiss company would boosts J&J's drug pipeline and diversify its prospects. J&J's biggest product, the arthritis drug Remicade, faces cheaper competition from Pfizer Inc.
Actelion shares surged nearly 19 percent to a peak of 187.70 Swiss francs on Friday, valuing the company at around $20 billion. They closed up 16.8 percent at 184.50 Swiss francs, more than matching the stock's total gains this year up to Thursday's close.
The company's focus on rare diseases makes it an attractive takeover target because drugs in that area are less prone to pricing pressure. Analysts at Bank of America Merrill Lynch and Bryan Garnier said a bid for Actelion could be worth up to 220 Swiss francs ($217) or 250 Swiss francs ($246) per share, respectively, stoked by appetite in the industry for fast-growing businesses. Actelion's Opsumit and Uptravi drugs to treat the life-threatening condition of high pressure in blood vessels to the lungs will generate more than $4.6 billion in combined 2020 sales, analysts forecast, up from an estimated $1.4 billion this year. J&J's shares finished up nearly 1 percent at $114.13. J&J's chief executive, Alex Gorsky, said earlier this year that the company was interested in deals to expand its main consumer, medical device and pharmaceuticals segments. In September, J&J agreed to buy Abbott Laboratories' eye care business for about $4.33 billion in cash. Actelion has long been seen as a takeover target. However, Actelion co-founder and Chief Executive Jean-Paul Clozel, who holds a 3.5 percent stake in the company, has repeatedly said he wants it to remain independent. In 2011, Clozel rallied shareholders against activist investor Elliott Management's campaign to put the biotech firm up for sale. Actelion's shares have more than tripled since then. There may be broader interest from other suitors in Actelion, according to an investment banker who did not want to be named, who added that a competing bid could come "most likely" from larger Swiss peer Novartis AG. Another source close to Novartis, however, said the company was not very impressed by Actelion's drug pipeline. A spokesman from Novartis declined to comment. -Reuters