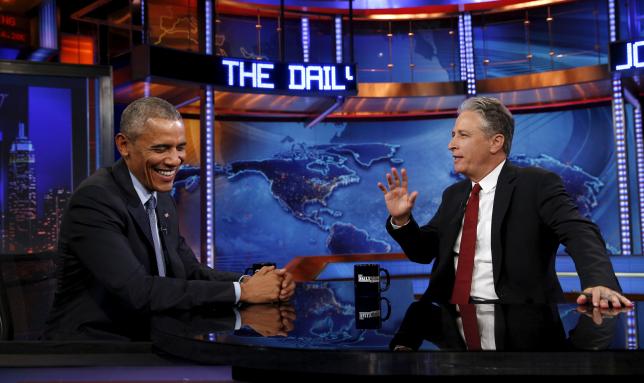 NEW YORK - Heartbroken fans are wishing Jon Stewart a "jonvoyage" on Twitter, but Donald Trump and the other 2016 US presidential candidates may be breathing a sigh of relief. Stewart steps down from "The Daily Show" on Thursday after 16 years of biting political and media satire just as the presidential election campaign - a comedy gold mine - heats up. Trump, the billionaire businessman turned Republican Party White House contender, has become Stewart's favorite target as his tenure on the popular Comedy Central program winds down. "Donald Trump is the candidate version of the hot dog-crust pizza," Stewart said in July. "You don’t want it, you never ordered it. You can’t believe someone came up with it. But now it’s all you want to eat." Stewart, who is widely credited with having transformed US political comedy, has dubbed next year's elections "Democalypse 2016." The 52-year-old comedian has mocked Trump's hair and gleefully ridiculed his comments on everything from immigrants to breast-feeding, none of which have stopped the star of "The Apprentice" from leading opinion polls among the 17 Republicans competing to represent their party in the November 2016 election. Trump is not the only one feeling the heat. Stewart has made merry with the consternation Trump has caused within the Republican Party, as well as Jeb Bush's White House campaign, the Bush family dynasty and Democratic candidate Hillary Clinton. "Presidential candidates may be thinking 'Thank goodness Jon Stewart is not going to be watching my every move.' Because the kind of things he discusses, like the foibles of particular candidates, do shape the public perception," said Dannagal Young, associate professor of communications at the University of Delaware. Through its juxtaposition of TV clips and flubs, "The Daily Show" also has mocked television news as much as politicians. "I imagine a lot of people on cable TV news are going to be happy not to have to wake up every morning and hear how Jon Stewart made fun of them the night before," said Robert Thompson, director of Syracuse University's Bleier Center for Television and Popular Culture. But 16 years of demolishing the rhetoric of political life and the 24/7 TV news cycle appears to have taken its toll. Stewart told Britain's Guardian newspaper in April that he was weary after covering four previous elections and "it didn’t appear that there was going to be anything wildly different about this one." To be sure, comedians like Jimmy Fallon on "The Tonight Show" and Seth Myers on "Late Night with Seth Myers," are also having a field day with the election. But David Letterman has retired, Stephen Colbert doesn't take over "The Late Show" slot for a month and John Oliver has so far shown no inclination to get into the topic on his show "Last Week Tonight" Young feels American politicians have not seen the last of Stewart, although he has given no details of his future plans. "I don't see Stewart disappearing. I think he will change the forum that he uses to scratch that itch. I don't think that itch will go away," she said. - REUTERS