'Jonny be good' is motto for in-form Bairstow 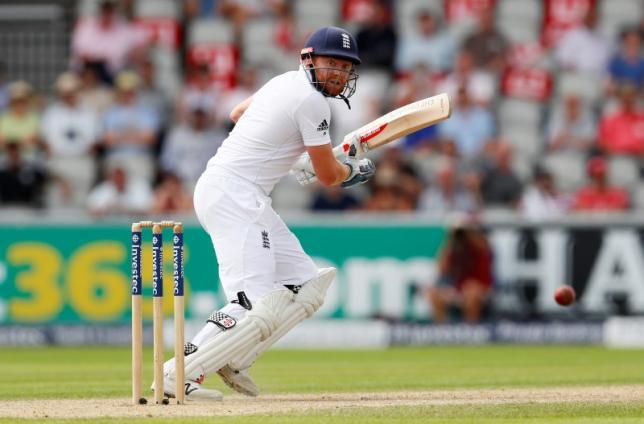 'Jonny be good' is motto for in-form Bairstow

COVENTRY, ENGLAND – Jonny Bairstow may be riding the crest of a cricketing wave but England's in-form wicketkeeper-batsman says he is only too well aware of the perils of taking things for granted. The flame-haired Yorkshireman has certainly been red-hot with the bat in the past year, making three big Test hundreds, three half-centuries and six scores in the 40s since replacing Jos Buttler behind the stumps against Australia in July 2015. Bairstow also struck a match-winning 83 not out in a thrilling one-day victory over New Zealand in Durham 13 months ago. "I'm happy with the way it's going but at the same time there's a lot of hard work still to be done in all facets of my game," he told Reuters in an interview before teeing off in the British Par-Three Golf Championship pro-am at Nailcote Hall on Tuesday. "It can all change very quickly and I'm only too aware of that having gone through some tough patches on my journey," said Bairstow who had an extra spring in his step the day after England beat Pakistan in Manchester to level the four-match Test series at 1-1. "You've got to keep working hard to keep improving. If you don't then all of a sudden you fall out of the loop -- focus on the next day is an old cliché but it's very true." England completely turned the tables on Pakistan at Old Trafford, handing the touring team a 330-run drubbing after losing the first Test at Lord's by 75 runs. Bairstow said the transformation was simply down to the players doing their jobs. "We didn't play too well at Lord's and to perform the way we did at Old Trafford was really pleasing," he added. "Joe Root played outstandingly well to make 254 and he and Alastair Cook (105) set their stall out to bat a long period of time," said Bairstow of England's huge first innings 589 for eight declared. "Then our bowling was really clinical. There wasn't necessarily one thing you can point to, it was about us executing our skills and putting the pressure on Pakistan. SOFT WICKETS "We gave them soft wickets at Lord's and they capitalised on that. If you give people soft wickets they'll take their opportunities." Bairstow has come in for occasional criticism for his glove work and he said that sometimes it is hard to adjust to playing in different formats of the game. "I hadn't kept wicket for three weeks before the first Test because I had been fielding in the one-day internationals against Sri Lanka so I'm pretty pleased with the way it's going," the 26-year-old explained. "It's good to be playing all forms of the game and being able to contribute in different areas. It's part and parcel of being a sportsman but yeah it's quite tough at times." Cook came under attack in some quarters for not enforcing the follow-on when Pakistan were bowled out for 198 in their first innings but Bairstow backed his captain. "There were still 200 overs left in the game so do you want to bat on day three when the wicket is good or do you want to bat on day five chasing a tricky 120 when the wicket is turning?" he asked. "It was a good decision because we won the game." Bairstow has a healthy batting average of 40.13 from 29 Tests and a respectable 31.40 in 17 one-day internationals. The wicketkeeper-batsman is constantly on the road with England and he said that sometimes there were drawbacks to all the globetrotting. "There's no point in doing this unless you are going to enjoy it," he added. "If you look at our group of players, everyone has grown up together, been through the system together and we're living in each other's pockets. "There's a stupid stat that one of the lads spent 300 nights in a hotel room last year... so if you're not enjoying it, it's going to be a long year. "You spend more time with the lads than you do with your families. Getting 15 lads together can be tricky as well, when we go away this winter we've got Bangladesh and India... you try having room service every night?," chuckled Bairstow. "It's good to get away from it sometimes... it's great fun to come down to something like this at the par-three championship." –Reuters