NEW DELHI (92 News) – Some 12 years after she strayed across the border in a train and was stranded in Pakistan, speech and hearing impaired Geeta made an emotional return to India on Monday to be reunited with her family. Geeta flew into Delhi on a Pakistan International Airlines flight from Karachi, accompanied by five representatives of the Edhi Foundation, including Bilqees Edhi. Before boarding the flight in Karachi, Geeta, clad in a red and white dress, used sign language to thank Pakistanis for hosting her and caring for her. Geeta landed in Delhi from Karachi to find a warm welcome from not just near and dear ones but also Indian and Pakistani officials and media people who have been broadcasting her story to the entire country for the past weeks. Geeta finally got the emotional reunion that she had been hoping for, for the past few weeks, when her family was finally located, with the help of Indian and Pakistan High Commission. Geeta had recognized her parents from the pictures that had been shown to her by the Pakistan High Commission. But the officials want her to undergo DNA tests to finally confirm her parentage. If the DNA tests match then she will be handed over to the family and in the eventuality that the tests don’t match, she will be taken care of by an organization, till her family is found. Meanwhile, Janardhan Mahato, who has been identified by Geeta as her father, expressed confidence that he will pass the DNA test for sure. 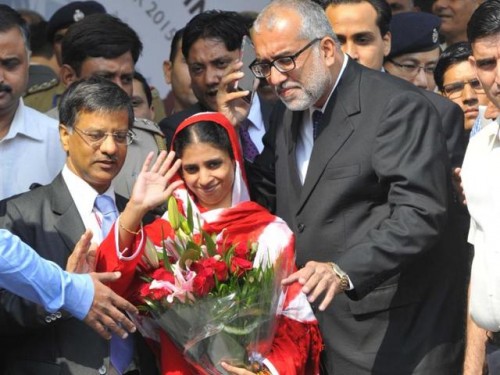