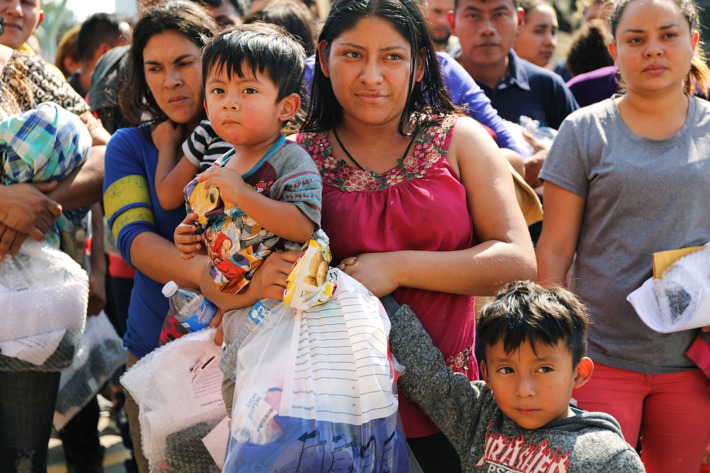 NEW YORK (Reuters) - A federal judge said the US government had made “very promising” progress toward reuniting some 2,500 immigrant children separated from their parents at the US-Mexico border as part of a crackdown on illegal immigration. The government has six days left to comply with the reunification order by US District Judge Dana Sabraw, who summoned government attorneys to appear in his San Diego courtroom to update him on efforts made in bringing families back together. “I’m very impressed with the effort being made,” said Sabraw at the end of the brief hearing. Lawyers for US Immigration and Customs Enforcement reported in a court filing late Thursday that 364 children aged 5 and older had been reunited since Sabraw’s order was issued more than three weeks ago. The number was updated to 450 today, an ACLU spokesperson said. Younger children were reunited last week. In Thursday’s status report, filed as part of an American Civil Liberties Union lawsuit challenging parent-child separations at the border, the government did not say how many reunifications were likely before the July 26 deadline. Nearly 850 parents had been interviewed and cleared for reunification as of Thursday and another 229 parents had been deemed ineligible because of criminal records, or because they “waived” reunification or for other reasons, the report said. The rest are pending review. More than 850 parents are facing final deportation orders, government lawyers told the court .The ACLU has asked Sabraw to give those parents at least a week after being reunited with their children before deportation so they have adequate time to obtain legal counsel and consider options. Sabraw has temporarily barred deportations of reunified families pending a final decision. Also late Thursday, a federal judge in Seattle ordered US immigration officials to share the information they have provided to the ACLU with attorneys general from 17 states and the District of Columbia. The AGs in June filed their lawsuit, which, like the ACLU case, challenges the administration’s family separations and other immigration policies. Children were parted from their parents by US officials at the border as part of a broader “zero tolerance” crackdown on illegal immigration by the administration of President Donald Trump, sparking an international outcry. The president ordered the practice stopped on June 20. Sabraw and the government have been at odds over the speed of reunifications, which the government has said have been slowed by the need to protect the safety of the children. After several testy exchanges in hearings and court papers, Sabraw said on Monday he felt that the government was finally emphasizing family reunification over lengthy procedures such as DNA testing and background checks on parents. On Thursday, US Homeland Security Secretary Kirstjen Nielsen said her staff was focused on meeting the judge’s deadline that same day, but added that “we will not cut corners.”