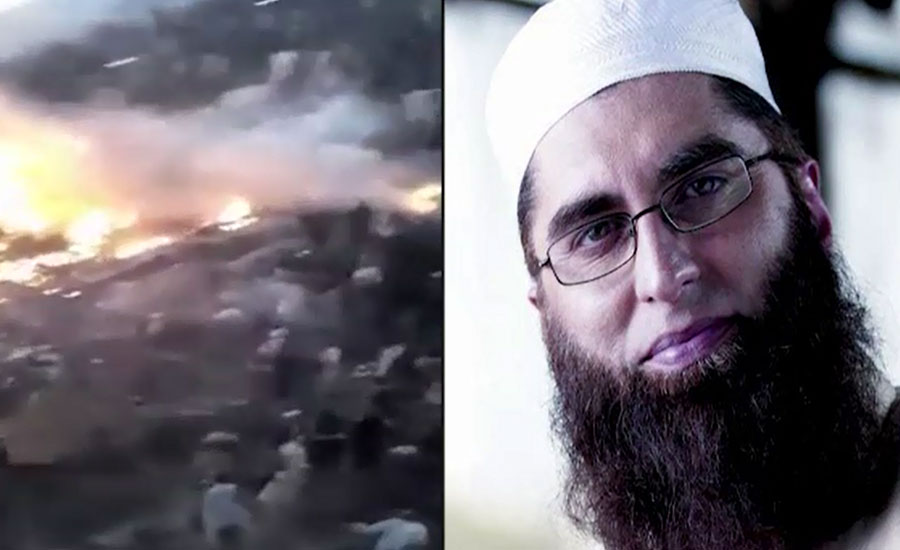 LAHORE (92 News) – Renowned singer turned Naat Khawan and religious preacher Junaid Jamshed left a void in the hearts of many when he passed away. Today marks his second death anniversary. Junaid Jamshed and his second wife died on December 7, 2016 when PIA Flight 661 crashed in Havelian. The flight was enroute to Islamabad from Chitral. He was in Chitral for a Tablighi Jamaat mission and was returning to Islamabad. Jamshed, aged 52, was born on September 3, 1964 in Karachi. His father Jamshed Akber Khan was a retired Group Captain in Pakistan Air Force. After graduating from local boarding high school in Lahore, Jamshed proceeded to join the PAF, initially focusing to become professional F-16 fighter pilot. But due to weak eye-sight his nomination papers were rejected by the PAF selection board. Jamshed was later accepted at the University of Engineering and Technology in Lahore where he excelled in courses in mathematics and physics before declaring his major in Mechanical Engineering. Jamshed gained Bachelor of Science, graduating in Mechanical Engineering in 1990. And join PAF as a civilian contractor and moved on to a short-lived career in aeronautical engineering. In 1983, Jamshed start performing rock music gig in Peshawar University and Islamabad University campuses while as a student at UET in Lahore. In 1987, Jamshed joined his engineering university''s rock band, Nuts and Bolt, as a lead vocalist and performed at Flashman’s Hotel in Rawalpindi. Though the band Vital Signs was launched in early 1986 in Rawalpindi by Keyboardist Rohail Hyatt and bassist Shahzad Hasan (Shahi), it wasn''t until later when Junaid Jamshed, then joined them as their lead singer. On his death anniversary, his brother Humayun Jamshed shared a heartfelt note. He tweeted, “Miss you brother. I pray that Allah joins us together again in Jannah. Ameen.” He also shared a childhood picture of the two.

Miss you brother. I pray that Allah join us together again in Jannah. Ameen pic.twitter.com/306scZwlKp

He was awarded the Tamgha-e-Imtiaz in 2007. He has sung a number of naats and hamds and had traveled the world spreading the message of Islam.