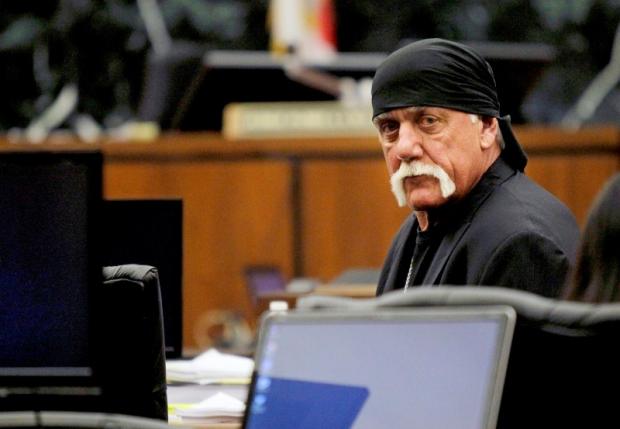 ST. PETERSBURG, FLA. – A Florida jury began hearing closing arguments on Friday in a trial that pits Hulk Hogan against the website Gawker over the site's decision to post a sex tape of the 62-year-old professional wrestler. The six jurors are weighing a celebrity's right to privacy in the Internet age against freedom of the press as protected under the First Amendment of the U.S. Constitution. Kenneth Turkel, a lawyer for Hogan, told jurors that Gawker's editors didn't even have the "common decency" to call Hogan for comment before posting the video. The action, he said, "tells you all you need to know about Gawker" and whether it deserves protection under the law. Gawker's lawyers, who will address the jurors later Friday, have argued that Hogan made his sex life a public matter by frequently discussing it over the years. Hogan testified during the two-week civil trial that he still suffers from the humiliation from the video's release in 2012 by the New York-based website known for gossip and media news. Hogan, who is suing in state court in St. Petersburg, Florida, near his home, has asked for $100 million in damages. The edited one-minute, 41-second video showed Hogan, a longtime star of World Wrestling Entertainment Inc, having sex with the wife of his then-best friend, radio shock jock Bubba the Love Sponge Clem. Hogan, 62, whose real name is Terry Bollea, said he did not know he was being recorded when the consensual encounter was filmed about a decade ago inside Bubba's home. Gawker obtained the tape without knowing its exact origin and chose to post only short excerpts. The editor involved said the post was intended as a commentary on celebrity sex tapes, with the video clip focused on bedside conversation and containing only nine seconds of sexual activity. Neither side played the posted video to the jury. It was entered as court evidence, so jurors may view it during deliberations. Wearing his signature bandana on the stand, Hogan sought to distinguish his real-life persona from the bombastic wrestling character he said he portrayed with "artistic liberty." He said his celebrity did not eliminate his right to privacy in the bedroom of a trusted friend's home. Gawker said it did not make money directly off the post, which it flagged as unfit for workplace viewing and ran without display advertisements. Experts for Hogan said the company netted substantial gains from the traffic it generated. –Reuters