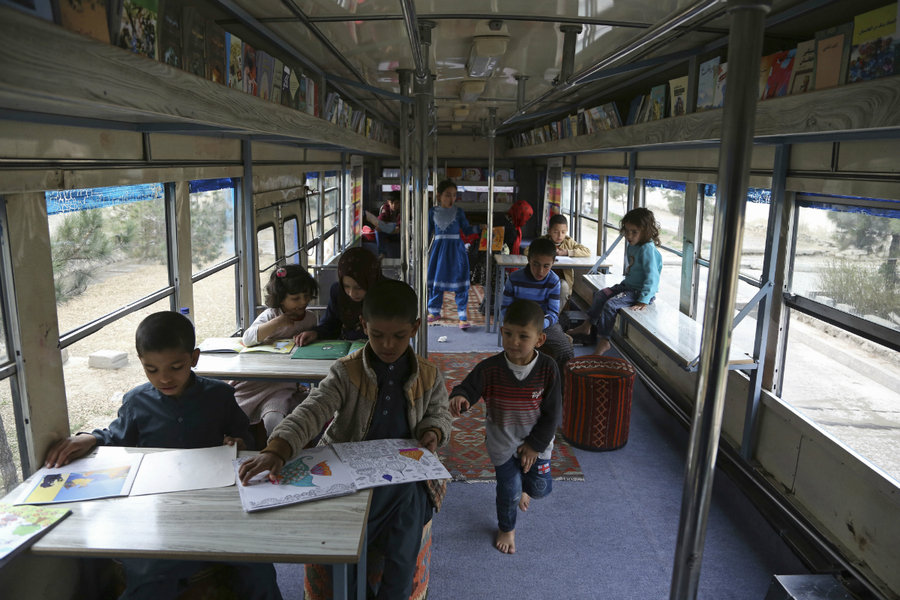 KABUL (AFP)- The door of the blue bus slides open and dozens of children excitedly bound up the steps, eager to get their hands on hard-to-find books in Kabul's first mobile library. Named Charmaghz , the Dari for walnut, which is associated with logic in Afghanistan because the nut resembles a brain -- the converted public bus is hard to miss as it winds through the dusty streets of the Afghan capital.
The library-on-wheels offers pupils and street kids free access to children's books, which are in short supply at public schools and libraries. It also offers one of the few spaces outside the home that children can use in a city where fear is increasingly keeping residents behind closed doors.
Charmaghz, used by as many as 300 children every day, is a rare exception.
The vehicle, which is rented from a state-owned bus company and takes precautions to avoid government buildings, main roads or other crowded areas targeted by militants in Kabul, is a relatively secure place for them to read, play chess and see friends. "Boys, you sit in the back and girls in the front. It is important to be organised," one of three volunteers tells the children as he pulls books from an overhead shelf and places them in outstretched hands. Unlike traditional libraries where chatting is discouraged, the constant hum of voices fills Charmaghz.
Children sit cross-legged on the carpeted floor or at desks reading aloud from some of the 600 books that have been donated by Afghan publishers. "I come to the bus once a week to read books," 13-year-old Zahra told AFP.
"Today I'm reading about how to improve your health. I'm reading what I should do and what I should eat." "When I go home I share the stories I read here with my brothers and sisters."  Book shortage The library bus was launched in February by Oxford University graduate Freshta Karim, who has dedicated herself to improving the reading and storytelling abilities of children in Afghanistan , an opportunity she never had as a child.
Karim grew up a refugee and returned to Afghanistan.She completed her undergraduate degree in Kabul before winning a Chevening scholarship to study a master's in public policy at Oxford. "When we were children we did not have access to... libraries for children," Karim, 26, told AFP.
"I remember as a kid at school we didn't even have chairs . we were sitting on the floor to study." The library bus stops at schools, parks or orphanages throughout the week, and is an "efficient" way to reach lots of children, Karim said, helping to improve Afghanistan's low general rate of literacy of just 36 percent.
Even now most public schools in Afghanistan do not have libraries, said Shafiullah, who used to work at Kabul's main public library and now helps non-profit organisations publish children's books. "Young people and children do not have access to different types of books except their school textbooks," Shafiullah, who like many Afghans goes by one name, told AFP.
"And there are only a few non-governmental organisations that sometimes help publish books for children." The time many children spend at schools in Afghanistan is limited. Afghans receive an average of 4.6 years of formal education, according to a 2017 survey by the Asia Foundation.  Broadening horizons Inside Charmaghz, 15-year-old Abbas reads to his friends the tragic story of Rostam, a hero in Persian mythology, and his son Sohrab. Abbas said the library bus had given him access to books he could not find at his school.
"At school you have a limited choice. You don't have a lot of books. But here you can find a whole range," he told AFP. More than eight million children are enrolled in schools across Afghanistan this year, official figures show.
But 3.5 million other school-age kids will miss out due to school closures, grinding conflict and poverty. Karim is realistic about the changes to literacy the mobile library can achieve in a country the size of Afghanistan. But it is a start, said Karim, who is hoping to garner enough donations to rent another two buses. "I don't think a mobile library will solve the thousands of problems that we have in our education system," she said. "But a mobile library is a small effort among a lot of efforts that we have to make."