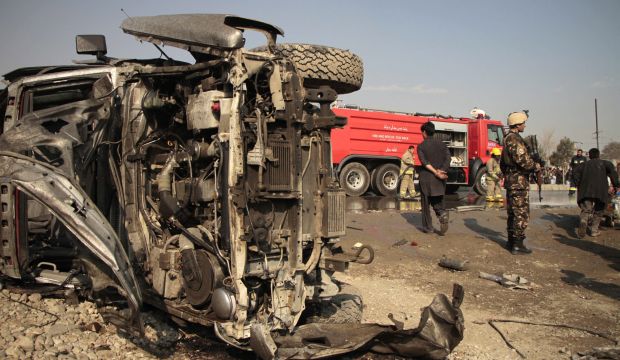 KABUL - A truck bomb exploded near an army compound in the centre of the Afghan capital on Friday killing at least eight people and wounding close to 200, police and health ministry officials said. There was no immediate claim of responsibility for the explosion, which shook the centre of the capital and ripped through homes and shops. The health ministry said 198 people had been wounded. Dozens were wounded by debris and glass shattering in the heavily populated area and cars parked at least a hundred metres were damaged by the blast, a Reuters witness said. Police expect the number of dead to rise, as buildings had collapsed and bodies were feared buried in the wreckage. The blast was unusually powerful in a city that is frequently targeted by the Taliban and other militants seeking to destabilise the Afghan government. Residents who witnessed the blast said they are concerned about the deterioration of security in the country. "The ground was shaking when the explosion took place. I thought it was an earthquake. It was so horrible," said Aziz Khan, a shopkeeper. "All residents in the area were shocked. We are concerned about the security which is getting worse day by day. There is no guarantee how long we will live," said Khan Zamin Zazai, resident of the area Smaller magnet bombs or suicide attacks have become a weekly occurrence in the heavily fortified capital, but large truck bombs have rarely penetrated the city's outskirts. A Western security source said the target was probably a compound used by Afghan intelligence officials and that as many as 15 people had been killed. An official at the Emergency Hospital in Kabul said the facility had been flooded with almost a hundred patients, including many women and children. Most were arriving on foot, the official said, and were being treated for superficial wounds. He said doctors had already started operating on the more severe cases. The Afghan war between the foreign-backed government and the Taliban has intensified since the NATO combat mission ended last year and most foreign troops were withdrawn. Afghan security forces are battling the Taliban with only limited support from coalition forces this year and have sustained heavy losses. -Reuters