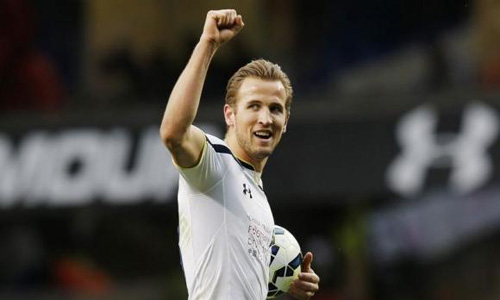 LONDON - Harry Kane's magical season continued on Saturday as he celebrated his first senior England call-up with his first Premier League hat-trick as Tottenham Hotspur beat Leicester City 4-3 at White Hart Lane. A landmark day for Kane and Spurs, though, was marred by an injury to their captain, goalkeeper Hugo Lloris, who had to be replaced after two minutes with a badly gashed knee and ended up being taken for treatment in hospital. Twice, Spurs had allowed the League's bottom-placed team back in the game after going 2-0 ahead and then 4-2 up with five minutes remaining but, ultimately, Kane's latest heroics guaranteed the win that keeps alive their hopes of a Champions League place next season. The 21-year-old has quickly become the Spurs fans' favourite this season, lauded as "one of our own" after developing through the club's youth ranks from the age of 11. None, though, could have predicted the meteoric nature of his ascent this term. He now has 29 goals in all competitions this season, including 19 in the Premier League -- making him the top flight's leading marksman -- and is set to become the first Spurs player since Gary Lineker in 1991-92 to score 30 goals in one season. His first after six minutes on Saturday was swept in from close range when the ball fell perfectly to him after goalkeeper Kasper Schmeichel failed to clear properly while his second after 13 minutes deflected off a Leicester defender. He then sent Schmeichel the wrong way from the penalty spot after 64 minutes to put Spurs back in front after Leicester had battled back to 2-2, and then he went close to a fourth minutes later only to sky a difficult volley over the bar. "I think he had a fantastic game, it was a fantastic performance and I am very pleased for him with his first ha-trick in the Premier League. It is impossible to speak better of him," said Spurs manager Mauricio Pochettino. "But we need to improve defensively. That is part of the process because we are such a young team but for Harry, he is getting closer to the top." Lloris was injured when Totenham defender Kyle Walker slid into him under a challenge from Jamie Vardy. Pochettino said the club was awaiting a report from doctors about the severity of the injury. - REUTERS