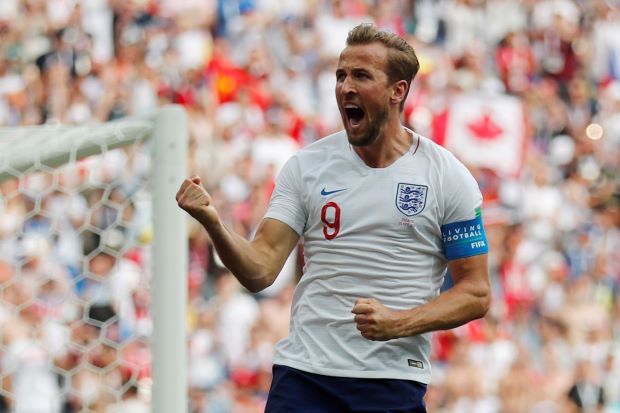 NIZHNY NOVGOROD, Russia (Reuters) - Harry Kane struck a hat-trick as England’s young and free-flowing team banished the ghost of past failures with a record 6-1 thrashing of feeble Panama on Sunday that eased them into the last 16.
Soccer Football - World Cup - Group G - England vs Panama - Nizhny Novgorod Stadium, Nizhny Novgorod, Russia - June 24, 2018 England's Harry Kane celebrates scoring their second goal REUTERS/Carlos Barria
England’s biggest-ever World Cup win, featuring two penalties by Kane then a fortuitous deflection off his heel, also guaranteed Belgium’s berth in the next round. “It’s amazing, I’m extremely proud ... We had fun out there,” said current tournament top scorer Kane, calling his third “one of the luckiest goals of my life.” Ahead of their meeting on Thursday to decide who tops Group G, England and Belgium are level on points, goal difference and goals scored. Sunday’s game at the pulsating, riverside Nizhny Novgorod stadium eliminated the Central Americans from the World Cup with nine goals conceded. Tunisia were also knocked out. Playing from the off with an ease and trickery that contrasted with the stressed-looking England flops of recent international tournaments, Gareth Southgate’s team romped into a remarkable 5-0 lead at halftime. Defender John Stones headed England in front in the eighth minute from a corner, losing his marker to angle home, before captain Kane made it 2-0 in the 22nd minute with a penalty after Jesse Lingard was pushed in the box by Fidel Escobar. Lingard made it 3-0 in the 36th minute with a beautiful strike from just outside the area before Stones nodded in his second and England’s fourth from a cleverly worked free kick routine. Kane scored another penalty just before halftime. The Tottenham striker bagged his third after a 61st minute shot by Ruben Loftus-Cheek hit his foot and bounced in. Kane, substituted to an ovation from the nearly 2,500 England fans, was the third England player to score a hat-trick at a World Cup following Geoff Hurst in the 1966 final and Gary Lineker against Poland in the 1986 tournament. In two games, he has scored all five of his shots. “We were ruthless in front of goal,” Southgate said.

Asked if his captain could hit the heights of a Lionel Messi or Cristiano Ronaldo, Southgate said he had started “brilliantly” and praised him for staying mentally strong as he waited to take penalties while the Panamanian players argued. “We wouldn’t swap him for any other No. 9 in the tournament, such is his ability to take chances,” the coach said. Panama’s equal-sized army of red-shirted fans danced and cheered on the ‘Canaleros’ (Canalmen) to the end. Substitute Felipe Baloy rewarded them with a consolation goal in the 78th minute, sliding home a free kick that was Panama’s first goal in their debut World Cup. But in truth, it was a humbling experience for Panama against a side known to get nervous and slip up against less illustrious rivals on the big stage. “Panama is like a small young child in football ... England is totally spectacular, a beautiful team,” said coach Hernan Dario Gomez, who went into the English changing room at halftime to congratulate Southgate. “It could have been an even bigger score ... What we did was to try to avoid a bigger catastrophe in the second half.” For England fans, the pain of being knocked out by Iceland in the 2016 Euros and a winless first-round exit at the 2014 World Cup, was finally slipping away. Southgate’s task now will be to keep his young charges’ grounded, and guard against complacency whomever they face next from Group H’s quartet of Japan, Senegal, Poland and Colombia. Though limited in ability, Panama’s forwards did get into space behind England several times, showing that even if they do have Kane up front, plenty of work is still needed in defence.