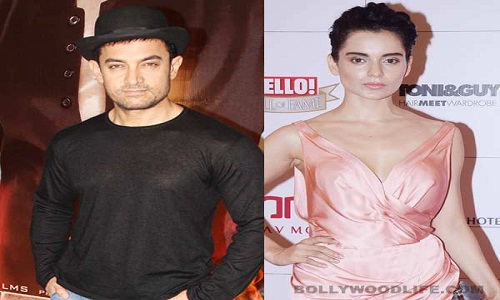 NEW DELHI (Web Desk) Bollywood actress Kangana Ranaut, who will be soon seen in ‘Tanu Weds Manu 2′, has denied reports that she will be playing Aamir Khan‘s daughter in ‘Dangal‘. Reports suggested that Kangana had been approached for the role but the ‘Queen’ actress said, though she would love work with Aamir Khan, she was never approached for the movie. “Dangal was never offered to me. I’d love to work with Mr. Khan sometime soon, but we aren’t working on Dangal together,” says Kangana according to a report published in DNA. Reports suggested that Kangana will play Geeta Phogat, daughter of wrestler Mahavir Singh Phogat to be portrayed by perfectionist Aamir Khan. The film will be directed by Nitesh Tiwari. The ‘Queen’ actress Kangana Ranaut vehemently denied signing ‘Dangal’ starring Aamir Khan. It was reported that Kangana will play Aamir’s daughter in the biopic but the actress said no such role was offered to her. Kangana and Aamir, apparently, had expressed their desire earlier to work together. While Aamir had called Kangana in a special episode of his show ‘Satyamev Jayate’, Kangana is following the superstar’s footsteps in not attending the numerous award shows.