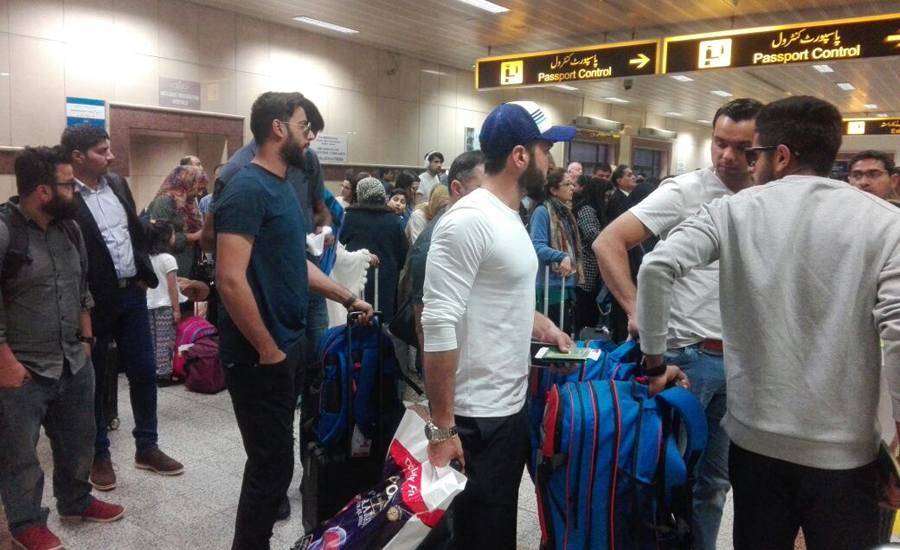 LAHORE (92 News) – After losing the first playoff against Islamabad United for the final of Pakistan Super League (PSL), the players and staff members of Karachi Kings have reached Lahore today. The first eliminator match of Pakistan Super League (PSL) will be played between Peshawar Zalmi and Quetta Gladiators at Gaddafi Stadium Lahore on Tuesday. The second eliminator match will be played on Wednesday at the same venue. Meanwhile, all preparations have been finalized in Lahore for the knockout phase of Pakistan Super League. Earlier, local players of Quetta Gladiators and Peshawar Zalmi arrived in Lahore on Sunday, where they will play an eliminator on March 20. On the other hand, preparations have been in full swing for two play-off matches of the third edition of Pakistan Super League (PSL) at Gaddafi Stadium on Tuesday and Wednesday. The excitement of bigtime cricket returning to Pakistan could be felt even with the demand for tickets for the eliminators in Lahore and final in Karachi is the hot topic in and around the stadium. Cricketing stars from across the world will captivate the nation with their sublime skills throughout the competition. Thousands of law-enforcement personnel will perform security duties during these days. A comprehensive traffic plan has also been chalked out to ensure smooth traffic flow around Stadium and other areas of city, while the shops and businesses have been closed for the next four days sighting security reasons. Meanwhile, Karachi has been starved of top class cricket for over a decade though Lahore had staged the PSL final and a World XI match last year. Stadiums in Pakistan were being modified right away for this purpose. “We have been making a determined effort to take PSL back to Pakistan it could be next year, or the year after that. We will keep trying. I have told my infrastructure department that the Rawalpindi stadium and Karachi stadium should be fully ready by next year,” said Pakistan Cricket Board (PCB) chairman Najam Sethi, who revealed that Multan and Lahore stadiums were fully ready. So much is the demand for PSL match tickets in Pakistan that Sethi has appealed not to ask for free tickets. “Please don’t ask me for free passes. It is a request to family, friends, government officials, corporate bigwigs, VIPS and VIP wannabes.”