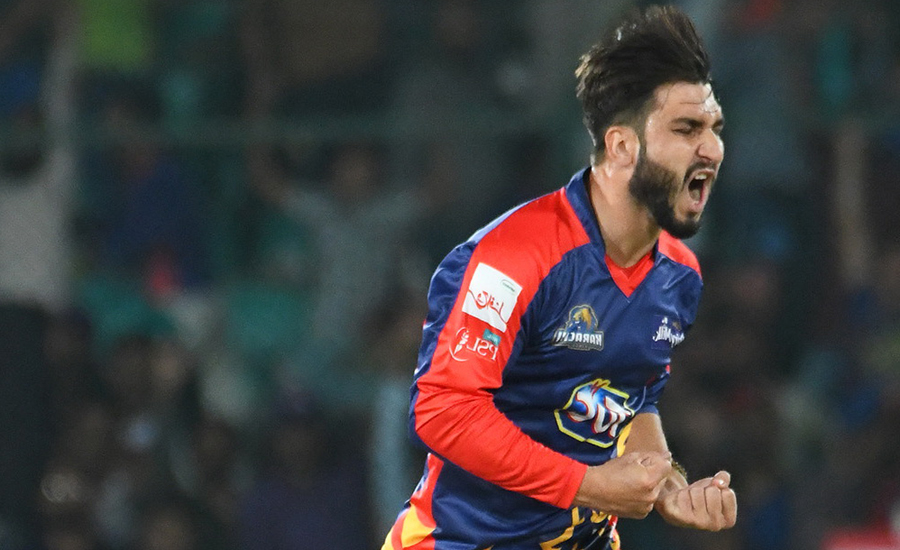 KARACHI (92 News) – Fast bowler Usman Shinwari kept his nerves in control to defend five runs in the last over and three off the last delivery to snatch a one-run win for Karachi Kings over Quetta Gladiators in a dramatic HBL PSL clash in front of a packed to capacity National Stadium Karachi on Sunday. Shinwari took three wickets and conceded just three runs to keep Quetta -- chasing 191 to win -- down to 189-7 in 20 overs and confirm a spot in the play-offs for Karachi with ten points in nine games. Shinwari's feat --3-43 -- overshadowed Quetta opener Ahmad Shehzad's brilliant 57-ball 99 studded with eight boundaries and five sixes. Ahmad fell a run short of the coveted three figures mark on the second ball of the final over as he was brilliantly caught by a diving Colin Ingram at mid-off. Shinwari also dismissed Anwar Ali and Sarfraz Ahmed before Sohail Tanvir managed a leg-bye off the last delivery. Karachi can further improve their position to second if they beat Peshawar Zalmi on Monday and improve their net run-rate. Karachi's victory also sent a luckless Lahore Qalandars out of play-off contention with six points in nine games. The result today also leaves Lahore's last match against Multan Sultans also on Monday, inconsequential. Karachi Kings were lifted to 190-5 in their 20 overs by Babar Azam's 46-ball 56 with six boundaries and a six and 44 not out by Iftikhar Ahmed which came off just 18 balls with five boundaries and two sixes. With the asking rate getting tougher with 56 needed in the last five, Shehzad unleashed brilliant hitting with three sixes off Shinwari to bring down the target to 28 in three overs. Despite Dwayne Bravo's run out in the penultimate over, Shehzad kept his nerves, hitting Aamer Yamin for another six and then benefited from four wide balls. Shehzad smashed a boundary to bring Quetta within five runs of victory. But Shinwari deprived Quetta from a victory with his last over spoils. "It was in my mind that the ball is reverse swinging so I stuck to the plan and came out successful," said Shinwari. "Wasim (Akram) told me that you must not sleep in the ground after being hit for sixes and try to come back and that's what I did," said Shinwari. It was Shehzad who put Quetta on the track. He was involved in a solid stand of 69 for the first-wicket with Shane Watson who made 19 with a six and a boundary. But Quetta were pegged back by left-arm spinner Umer who dismissed Watson, Rilee Rossouw (ten) and Umar Akmal (27) to finish with 3-26 in his four overs. Umar hit three sixes in his 20-ball stay and added 46 for the third-wicket with Shehzad. Karachi skipper Imad Wasim termed a good total as the key. "We had a good total on the board and it is tough to maintain ten an over," said Imad. "Shinwari bowled very well in the last over and Sohail Khan bowled his last two so well and it’s an amazing win against a formidable team." Quetta skipper Sarfraz praised Shehzad. "I think it was highly enjoyable match for both the teams," said Sarfraz. "Cricket is not easy as you can score 12-15 runs in an over and then can’t make five in one. Credit to Shinwari who bowled well and Shehzad also batted well." Karachi, sent into bat on a flat pitch, were off to a solid start of 69 as Babar and Colin Munro set the platform for a big total but leg-spinner Fawad Ahmed pegged them back with two accurate overs and the wicket of Munro who made 26-ball 30 with two sixes and a boundary. Liam Livingstone also fell to spinner Mohammad Nawaz but Colin Ingram lit up the stadium with three huge sixes, however his robust innings of 10-ball 24 did not last long. It was Iftikhar who gave the real impetus to the innings as Karachi mustered 65 in the last five overs. Rookie fast bowler Mohammad Hasnain celebrated his inclusion in the Pakistan team for the Australia ODIs in the UAE with 2-38 in his four overs. Karachi Kings beat Quetta Gladiators by one run in HBL PSL Brief Scores: Karachi Kings 190-5 in 20 overs (Babar Azam 56, Iftikhar Ahmed 44 not out) Quetta Gladiators 189-7 in 20 overs (Ahmed Shehzad 99; Umer Khan 3-26, Usman Shinwari 3-43).