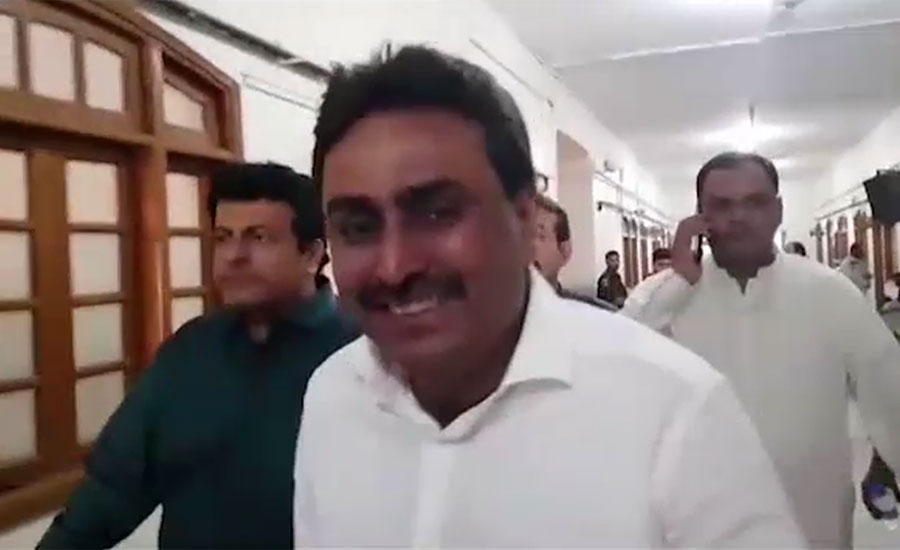 KARACHI (92 News) – The Karachi National Accountability Bureau (NAB) on Wednesday suddenly took  action and tried to stop Pakistan Peoples’ Party (PPP) leader Jam Khan Shoro on his arrival to the Sindh Assembly. It was reported that the anti-graft watchdog wanted to take Jam Shoro into its custody and the NAB tried to stop him but the PPP leader managed to flee from the scene. It is pertinent to mention here that Sindh High Court (SHC) extended the interim bail of former local government minister Jam Khan Shoro and others till the 14th March in a corruption case. After protective bail, Jam Khan Shoro was absent from the scene and also did not attend the assembly’s sessions. Reportedly, the NAB was tried to stop him for the investigation of another inquiry. It was also reported that Jam Khan Shoro arrived Sindh Assembly on the arrival of PPP Chairman Bilawal Bhutto. Meanwhile, other PPP leaders (Jiyalas) were feared the sudden action by the NAB.

Earlier, the Pakistan Peoples Party (PPP) senior leaders of have filed applications for protective bail for fearing of the NAB's arrests. According to the details garnered, the PPP leaders started to seek protective bails against action by the National Accountability Bureau (NAB) increased in the wake of the February 20 arrest of Sindh Assembly Speaker Agha Siraj Durrani. Former Sindh minister Jam Khan Shoro and ex-federal minister Aijaz Jakhrani have approached the Sindh High Court for pre-arrest bail. Submitting his application, Shoro said he was facing multiple NAB inquiries and had already acquired protective bail in some cases from the SHC. However, the PPP leader said he was apprehensive that the anti-graft body could soon move to arrest him in another case. Shoro’s petition requested the SHC to bar NAB from conducting further inquiries against him and to declare the court’s permission mandatory for his arrest. Apart from Shoro, former federal minister Jakhrani also filed an application for protective bail. He is facing an inquiry related to the accumulation of assets beyond known sources of income. The SHC barred the NAB to take any action against any Shoro and issued notices to the NAB director general and other on March 14. The court also accepted the protective bail of Jakhrani on behalf of one million rupees. Earlier, the NAB Karachi team arrested Agha Siraj Durrani from Islamabad in assets beyond income case.