Karachi operation is against MQM, not criminals: Farooq Sattar 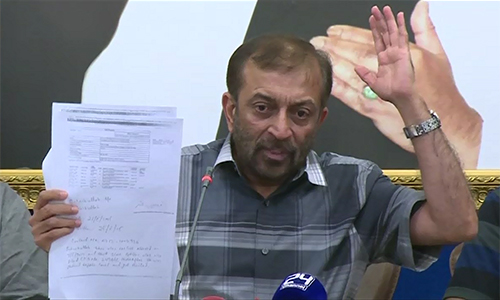 Karachi operation is against MQM, not criminals: Farooq Sattar

KARACHI (92 News) – MQM leader Farooq Sattar said that the Karachi operation launched against criminals is against his party. In 92 News Program ‘Hum Dekhain Gaay’ on Tuesday, he said that their apology is not tantamount to bowing or confessing to the crime. “If separatists are being brought to national mainstream then why the MQM is being expelled,” he said, adding that estranged people should be reconciled, not left alone. Farooq Sattar said that they neither have the list of people getting training in India nor they went after getting permission from them (MQM). He said that Syed Qaim Ali Shah had talked about forming a monitoring committee, but it did not happen. “We demand that our workers must be presented in courts. Our workers should neither be tortured nor they be killed in encounters,” he said. The MQM leader said that they wanted to contact the establishment and remove misunderstanding if any.